hi all, the universal engraver is this one (yeah i know the have a generic name xdd) Universal Engraver - 15000 mw Blue CNC Laser Engraving Machine 40X40 inches, i can´t find any reviews of this machine, i am worried, the machine actually have less the 15.000mw, and also this will be my first laser engraver machine, i want to use to have clean cut on 3mm plywood and 3mm balsa wood, and maeby leather, do regular engraves on aluminium plate, glass cast, a employee of the company said if i need cut plywood of 3mm i will need a router attachment, this one Universal Engraver - CNC Router for Blue CNC Laser Engraver, anybody have experience with that attachment, i will work fine, or i just save and buy a more expensive machine, i also thinking is the router attachment will work to cut 1 inch wood, thanks!

UV lasers are not the best for cutting, but it helps to add an air assist.

Recently @mcdanlj and I had a conversation on twitter with @clolsonus about his solid state laser and it’s poor cutting performance due to char formation. Using a CO2 laser myself, my suggestion was to add an air assist. An air assists helps with cutting by several mechanisms; Keeps the beam path clear of smoke (more important with small wavelength lasers due to increased laser light scattering by smoke particles) Removes char debris from the cut. Adds more oxygen into the cut which can prom…

If one of your primary goals is cutting 3mm wood, this is probably not the best choice. I agree with the vendor as far as to say that a router spindle is a better choice for cutting wood than a 15W blue diode laser.

Overall, this vendor web site doesn’t have much technical information. They don’t even say which collet the router takes. (Zooming in on their pictures shows ER11 collets on a 1.5Kw spindle.) One hopes that the price includes the 3 phase spindle drive. 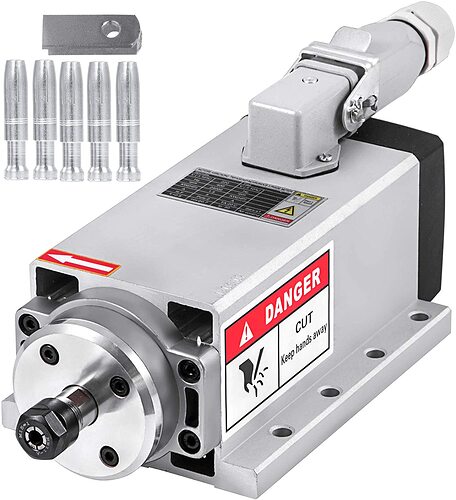 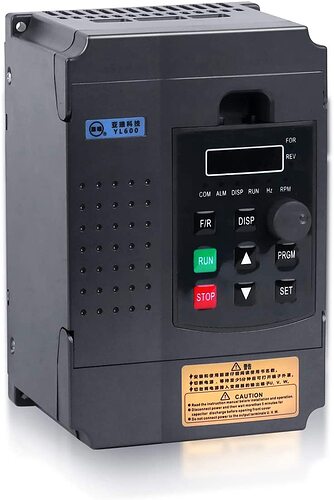 I don’t know what else they are selling in the kit, of course.

Why don’t you tell us more about what you want to accomplish? We might have more useful recommendations that way.

Thanks NedMan and Thanks Mcdanij! well i have multiples use for the machine, i want to engrave plywood, and i also want to cut plywood, i am looking to engrave cast glass and ceramic as well, i am a bit confuse, because i also work with guitars, and i want to engrave on the guitar body, the vendor also said the with the spindle motor i can go 1.5 inch deep, so i can try to cut guitar body from wood blanks, by the way, yes the spindle motor is a ER11 1.5w, but i have to the vendor about the variable frequency drive and he said, the i don’t need it, that to connect the spindle motor they will send me a video when i buy the machine , well, he said when i asked about is the kit include a variable frequency drive(they don´t include ), or is i need it “-We provide everything. You do not need anything else “”-It connects to the frame. We provide video instructions for it”, so yes that is a bit confusing, good thing that is don´t buy it yet…, so yes i have the purpose to buy the router spindle motor because he said i can easy attech to the laser engraver and can cut even 1.5 inch wood (so i can cut the plywood and the body guitar) 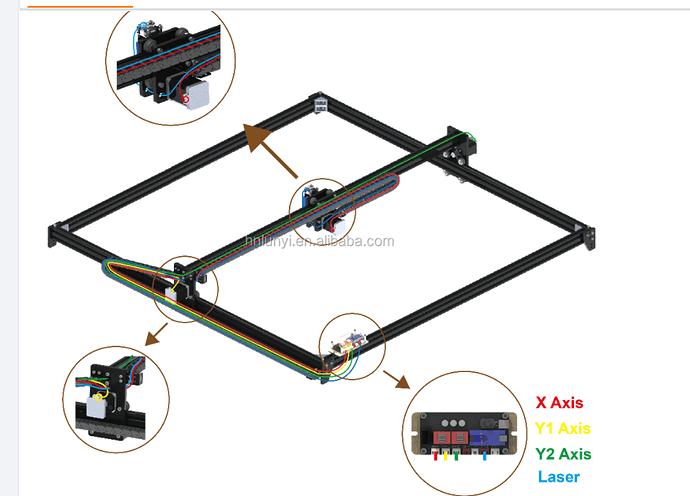 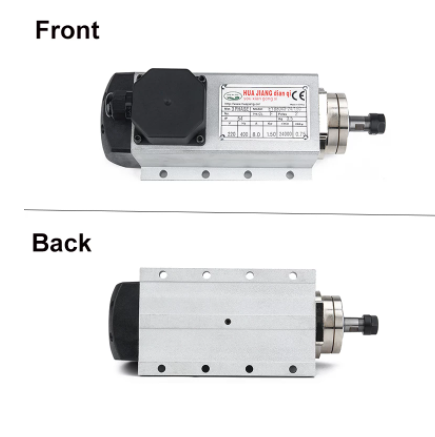 Their spindle motor kit probably includes the entire Z assembly that moves the spindle up and down, but they don’t show anything about what it is like, and as I say having those gantry plates made out of acrylic isn’t something I would use as a router, especially cutting more than a few mm.

I’d suggest at least thinking about getting a router that is really designed to be a router, and then either mounting a laser head on the router for engraving (but be careful; these blue LED lasers are really quite dangerous; it is very easy to permanently burn your retina with them), or get a separate CO2 laser that will be substantially more capable than a diode laser.

For buying a router that is meant to be a router, I don’t know who is currently selling capable already-assembled or mostly-assembled kit routers in that size around that price point. (I built my own openbuilds OX derivative router from bare parts, just because I like doing that.)

CNC routing makes a lot of dust. Personally I’d rather not be shining a powerful laser at combustible wood dust. I have a dust collection system connected to my router and I still wouldn’t put a laser head on it.

We have another member of the forum that makes electric guitars @MikeMeyer . He has used his CO2 laser to cut guitar patterns from 3mm ply and then use a router with a pattern bit to cut the shape in the body blank and to accurately place the cut outs for the pickups / electronics.

Mcdanlj, so yes i see i weill no be able to cut guitar body with that…, well i already know the most probably will no work, but for less then 800$ in total for a 1x1meter laser engraver, and maeby a basic engraving work, and dont thinks is a bad idea, i mean i think a least i can cut the plywood 1/8 without problem with the laser, i found on alibaba the 40w 1x1mt, i am talking right now with the seller on alibaba, 1m*1m Diy 15w 30w 40w Logo Mark Laser Engraving Machines On Metal Engraving With Grbl Control - Buy Cnc 100*100cm Laser Wood Cutter,Balsa Wood Cutting Engraver Machine,3d Laser Engraving Machine Product on Alibaba.com, i will buy in a future a router or try to my my own, because make guitar is not my priority right now, but i need to cut 3mm plywood, and be able to engrave wood, cast glass, leather, etc and i think with that one from alibaba i can do it without problem, thanks for your help, i am looking right now information about the openbuild ox router, i will try to make one in a future, i also find this router, maeby in a few month i can afford one https://www.toolots.com/6040.html?cid=10311468392&gclid=Cj0KCQjw6-SDBhCMARIsAGbI7UgWK6cUAbmmzeeSKbX2XehWGcykVoU2S9EB8Q1qf6jlka6KzgVh4dUaAh_nEALw_wcB

thanks Nedman, i also have a $150 touter table, so i will think that idea, i hate the table router because i already screw some templates xdd, but i can give a try doing like that!

i want to say thanks to both Nedman and Mcdanlj, i get to the conclusion, the in a future, maeby 6 to 12 month i will buy a router like this OpenBuilds LEAD CNC Machine 1010 (40" x 40") - OpenBuilds Part Store, but for now, my idea of doing engrave on wood, ceramic, metal, and cut 3mm plywood, i should have what i need with the 1m*1m Diy 15w 30w 40w Logo Mark Laser Engraving Machines On Metal Engraving With Grbl Control - Buy Cnc 100*100cm Laser Wood Cutter,Balsa Wood Cutting Engraver Machine,3d Laser Engraving Machine Product on Alibaba.com , also i going to give a try to the spindle

they give me this price, i think this is good 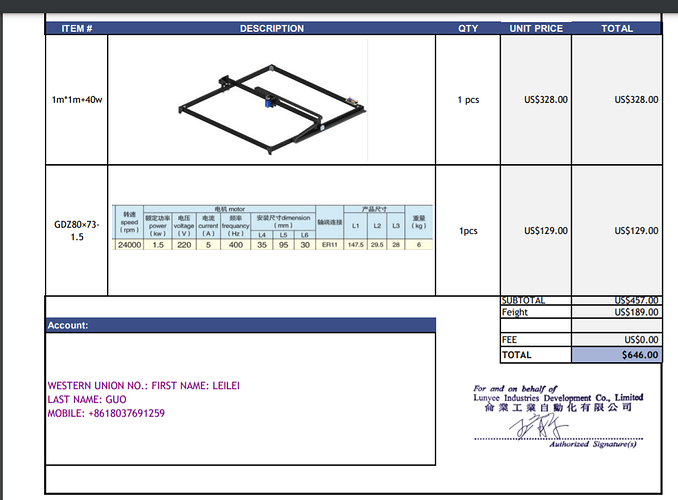 Ned - thanks for passing this on to me. Frankly, if the objective is to build guitar bodies, I think Jose is better served buying a stand alone 6040 CNC router or cutting simple templates with the K40 (my solution). I know a lot of guys like the journey and enjoy designing and building a better mousetrap, but as near as I can tell, this seems inordinately complicated. Moreover, there’s a lot of white noise in the guitar building community about the magic of CNC routers and how indispensable they are… yeah, they’re great, but…Gibson, Paul Reed Smith and others build their high-end guitar bodies by hand from templates.

My advice to Jose is not to over think the solution; use the simplest approach first and see what comes out.

Oh and BTW, the real challenge is building the neck,

thanks MikeMeyer, i will take your advise, i will buy for now the 40W laser engraver, they are selling me for 328$, and shipping 70$, they said i can cut to 5mm plywood, so i think i can make template for body, necks, pickguard, without problem, and i use my table router to cut bodys, and try my best with the necks xd, and i will buy in a future the 6040 cnc Router!!, i am bit new on this world, i have a question, i can install a spindle to the CNC 6040? i will like to my details like this, i don´t know with the regular router i can do like this, thanks so much 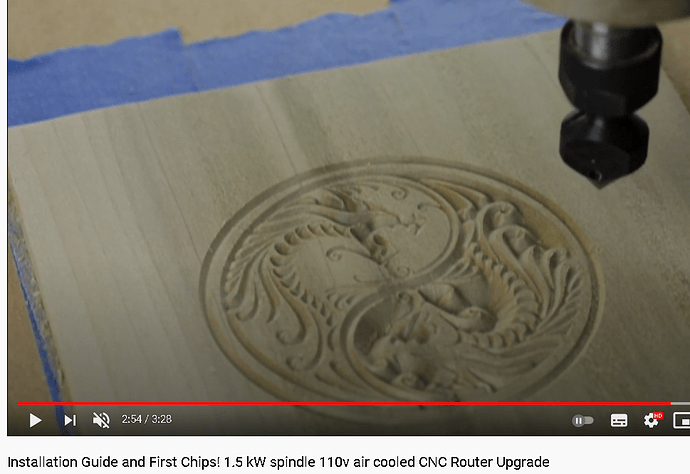 What you are showing there is a function of a CNC router with a V bit and software that controls that path. There is both proprietary and open source software that can tell a CNC router to carve a path like that. “6040” just is a general class meaning that the bed is 60cm by 40cm, it’s not a trademark.

As you look at routers, there’s a lot of people here with expertise who can help you determine a good direction for a router, including people who have designed routers. So as you start to know what you want to do, the #cnc-routers will be a great place to learn more and ask more.

thanks so mcuh Mcdanlj, now i have a bit more knowledge, i will trade to make or buy a 6040 Router, i find that for $1000-$2000 there is some good cnc, so i will save some money and in a few month do it, but i will star with the laser, it cost under then $400, so i think is a good first step to learn some basic stuff about the software aswell, thanks for all your advise