I made my first edge lit sign today! Sort of :) I restored a

I made my first edge lit sign today! Sort of

I restored a '55 Thunderbird with my dad a couple years ago, so I decided to make the Tbird logo. It came out pretty decent…

I need to build a box for the bottom now.
Heres why I say ‘almost’… I did the engraving with the Laser, but had to cut it out by hand. No matter what I did, I couldnt get cut lines where they belong. Heres what I did, maybe someone can tell me what I did wrong.

In Corellaser, I imported the Tbird bmp. On a new layer, i used the line tool and made straight lines where I wanted cuts. When it came time to cut after the engrave, it was all over the place. Luckily i had so little faith in my abilities that I had the laser switch off.

Is there a better way? What did I do wrong? I posted the CDR here: http://maxboostracing.com/tbird.cdr

Open to any criticisms or comments.
Thank you! 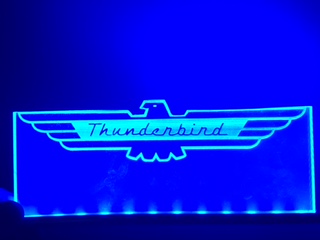 Cool! I wish I had a larger bed so I could make really big edge lit stuff. I’ve been making larger pieces using CNC and get similar results with the right acrylic.

That looks great. In regards to what you did wrong for cutting, I’ll take a look at the CDR file & see if there is anything I can see glaringly obvious that could cause the cut issues & let you know if I find anything.

edit: okay, it is giving me an error on trying to retrieve the file… says “404 - File or directory not found”.

So, maybe some suggestions to look at are regarding your CorelDraw/CorelLaser settings. Can you post a screenshot of your current settings? Also, were you the one that was recently having issues with cutting & WMF output etc? I have a feeling that was you

@Yuusuf_Sallahuddin_Y Yes, that was me! And I took what I learned from that and it didnt work here. (sigh). I will post what I have and try posting the file again…

Im not sure why the link doesnt work, my apologies. It looks right on the server.

This is how I have it set up…

This is that object manager http://maxboostracing.com/Laser/tbirdlayers.jpg

This is the drawing: http://maxboostracing.com/Laser/tbirdall.jpg

This is the cut lines layer: http://maxboostracing.com/Laser/tbirdcutlines.jpg

@Bob_Damato I took a look at the 3 files you shared again & I have a feeling the issue is still the same thing with cutting, where your cut lines are not joined to each other.

I see in the first one (object manager screenshot) that there is a group of 60 objects that make up your cut lines. You want to try get it as 1 closed shape.

Are you using CorelDraw to do the design or other software? Might be worthwhile using something else to design your cut lines (e.g. Inkscape).

I am using corelDraw to make the cut lines. I would have thought even if they werent connected, it would have cut approximately where I put them! Im good in photoshop, but thats about it. Corel draw, in my opinion, kind of sucks. I guess I just need to practice more. Im heading to the bookstore tomorrow, it might be time for a coreldraw book. :o/

If you are still having problems cutting open curves try using EMF as your output file. Alternately, for an outline this simple, use the polyline tool to trace the cut path and you will get a continuous line. You can make adjustments to that cut path using the shape tool to add/move line nodes.

@Bob_Damato Personally, I dislike Corel Draw also. I would be much more inclined to use some other software (Inkscape or Illustrator) to draw my cut lines & then import into Corel Draw as SVG format.

It technically should cut approximately where you put them, but you would need to make sure you have a reference point for the top-left corner (I used a border-less fill-less box around the lot). After that, the only thing that I can think that would be causing it to be cutting in an odd position is if your Board model & Board ID are set incorrectly. The machine will work sometimes but do odd stuff other times.

Thank you Yuusuf and Ned. Im getting MUCH closer. I used your recommendation of polyline for my cut line. now it is one object and actually cuts as a cut and not all over the place. Problem is, the cut isnt over the engrave like it should be. This is my object box now. http://maxboostracing.com/Laser/tb1.jpg

This is my polyline over the engrave: http://maxboostracing.com/Laser/tb2.jpg

This is the dialog box. I tried top left, center, etc.
http://maxboostracing.com/Laser/tb3.jpg

And this is what it comes out like (I practiced on card stock)
http://maxboostracing.com/Laser/tb5.jpg

I tried the box around the whole mess too. not sure what the issue is now.

@Bob_Damato Try doing the engrave with WMF output instead of BMP

If you want to try and post the cdr file again I’ll try take a look at it.

@Bob_Damato Well, it’s progress so far. At least in regards to the cut line.

Now, when engraving are you selecting the engrave object + the corner reference point (CRP) & then for cutting selecting cut object + the CRP? (I’m assuming the layer called “Border” is your CRP).

It seems like your position is off for the cut by being too high in comparison to the engrave. Not 100% sure why that is happening at the moment.

Can you verify these settings for your machine & share screenshots again if possible:

In particular the Mainboard in the dropdown at the top & the Device ID at the bottom. If either of these doesn’t match the details on your mainboard in the electronics panel, modify them to match.

@Yuusuf_Sallahuddin_Y and @Nedman That was it! Now Im able to actually cut where I want to! The issue was two-fold, for some reason when I hit cut, it had a different Y offset than when I engraved. but it was only 3 mm, and I was easily off by 20mm. Secondly, my device ID was off. Im 100% certain Ive fixed this before, I dont know why it reverted back. Very strange. But thank you guys, I appreciate your help and patience with me!

You are very welcome @Bob_Damato , we’ve all been there. If you ever get the chance please pay it forward to other people who may need help.

@Bob_Damato Glad that your issue seems sorted out now

The software is odd, so I guess if things start being funny again check that Device ID again (might change back for whatever odd reason).