I am looking for a Firmware that supports dual X Carriages.

I am looking for a Firmware that supports dual X Carriages. In theory Marlin does the job, but it has some bugs that render it useless for Dual X. I have a completely built machine sitting here that i can not fully use now 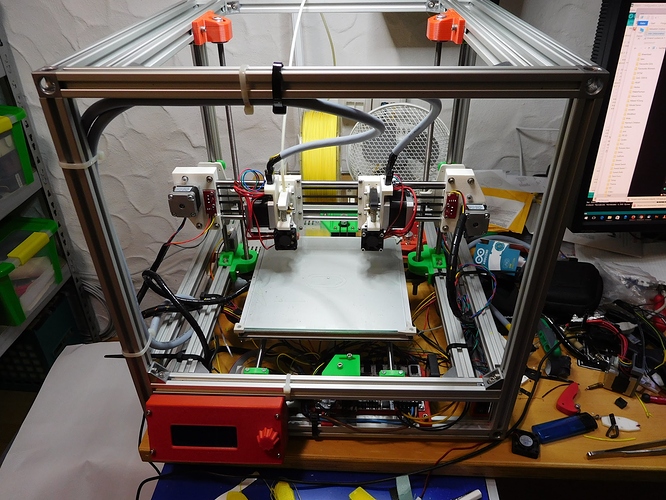 @Ariel_Yahni_UniKpty I just went over the config.h of repetier and did not find any hint on dual x. Can you be more specific as to where to find the settings?

Well it depends. If you want the same signal in bough extruders then is ditto.
﻿http://www.repetier.com/firmware/v091/

No, completely seperate extruder movements and control is neccesary. I don’t want a copy machine, but something that can use two different materials in quick succession. Marlin offers that, but sadly it’s to buggy.

You could take the BCN3D Sigma firmware as a starting point.

It has independent hotends on a physically shared axis that are driven by separate motors.

The firmware is quite new and a bit dedicated to the Sigma mechanics but you might be able to modify it for your needs. Search BCN3D github.

@Miguel_Angel_Salmer1 that looks like copy/cloning. Sadly not what i am after.

@Neil_Darlow thank you, that looks promising

i dont know if smoothieware supports it, but if not it shouldnt be hard to add

We are weeks away but that is exactly how we are going to do dual head machines going forward. We have rewritten Marlin and will make it work… But no promise on when it will be ready for prime time

Awesome machine. Use something simple like the ev3 programming software

The software can do all sorts of things including dual movements. The main thing is that it is easy to use

@Phoenix_and_me As in lego mindstorms ev3?

Yes that kind of programming should function for a 3d printer. You reprogram the module to look at your 3d printer motors

What are the bugs preventing you from using Marlin?

@Oystein_Krog The main problem is that the initial positioning of the second X carriage is not determined correctly. Homing works fine for both carriages, but as soon as you try any kind of movement for X2 it tries to got further in + direction, even though it has already hit x-max. It is open as issue 2861 on nGithub.

This is a support request. Using RC3 i try to use dual x carriage in mode 1. Home does work for both...

Why didn’t you get 2 heads and 1 carriage?

A single head has less mass and can be moved faster. Also you don’t need to cool them down to prevent ooze while the other is printing. Also you could use completely different extrusion setups for each. Carriage, let’s say a super light bowden setup for fast ABS/PLA printing and a heavier direct extruder for elastic filament that prints at lower speed.

Hi, i have a working dual x carriage printer with marlin, can you upload your configuration file?