https://www.youtube.com/watch?v=m5Q-1fyB5qY This is the HyperCube! An infinity mirror cube I built using semi-reflective acrylic,

This is the HyperCube! An infinity mirror cube I built using semi-reflective acrylic, ~430 WS2812b’s, and an ESP8266. The construction isn’t too complicated, but the result is dazzling! I’ve been so busy I’ve barely had time to experiment with more light patterns, but I’ll get there. Music reactivity hopefully to come soon too!

Very nice cube !!! I’m interested to know what is that semi-reflective acrylic material exactly ? and where did you get it ??

Is it mirrored on the sixth (bottom) side, too, or do you have the electronics under there?

@JP_Roy I had a batch made in China, much better than using film. I think I had ten full sheets made, and then cut into 600x400mm pieces to fit my laser cutter. I specifically wanted 2mm think sheet and it wasn’t available anywhere. (You can buy 3mm sheets in the UK.)

@JP_Roy I got these from a local supplier, but I’ve heard that pretty much everyone selling semi-mirrored acrylic gets it from Plaskolite (https://plaskolite.com/catalog/see-thru-mirror-acrylic/). There are various stores online. But it’s expensive, and I’d look into options on Alibaba or Aliexpress to get it from China, as Jeremy mentions.

@dougal Mirrored on all sides! The electronics are in a separate control box, which needs to be plugged into an outlet.

I plan to test the effectiveness of that film on glass for a build of either a dodecahedron or Icosahedron but that cube from Dylan seems to have a perfect mix of see-through vs mirror effect.

Did you actually try the mirror film first ? Can you elaborate on the comparison with why it the semi-mirrored acrylic ?? I located some 3mm thick material ($$$) but is it worth it to find some 2mm thick like you did ??

@JP_Roy I tried lots of different mirror films, different makes, and different transparencies, and actually got quite good at applying the stuff.

The film frequently starts to peel after a few months.

The illusion is also much much deeper with proper mirrored acrylic. I’ve attached a picture of some stars I made for a customer last week, you can see the depth of the illusion.

I prefer 2mm mirror as I mainly use it for double-sided mirrors and it means I can make the cases 12mm thick, with 3mm mirror they would be 14mm thick. 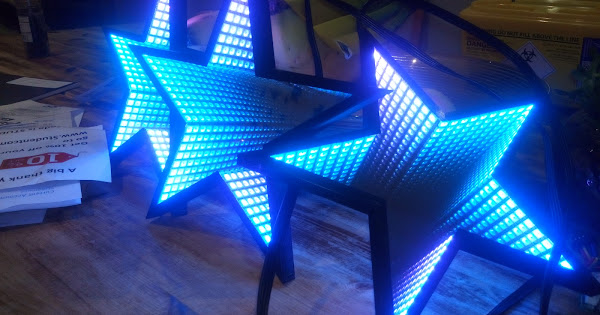 @JP_Roy The films are crap. I tried these first and it’s nigh impossible to apply without bubbles and scratches. Semi-mirrored or “see-through” acrylic is what you want, the thickness won’t affect the optical properties (this is 3mm). I got mine from a local supplier, but there are plenty of online stores (Plaskolite) in the US, and chinese suppliers that will have it much cheaper. Aim for ~70% reflective, 20% transmissive.

@Dylan_Lovinger , I am trying to create something very similar but Instead of a cube I am wanting to make an Icosahedron. I’m still new to FastLed so I would love to talk to you about how you go about writing animations. Ultimately, I will have 30 strips of LEDs. sets of 3 will be tied together so I will have 10 sets of 3 strips. I’ve already begun working with RGBset and I’m loving the potential it has but Id sill like to talk to someone who has created something similar to what I’m envisioning

This is amazing, great work!

I have worked with the films for over 20 years… do not apply to plastics as It will peel and also damage the hard coat of the plastics. Plastics gas and most films now are coated with a layer which help with anti scratching its applied heavily on mirrored films to give you the shine. this does not allow the gases to pass through, There for pushing the film off. If your going to apply most people use washing up soap and way to much. This will leave a waxy under layer and will not dry 100% optically clear. Best to use Johnsons baby bath. ( blue bottle) no I don’t work for them. This has been tested and dries without leaving any residue. Only 2 drips on half a pint of water is enough…

Kudos! Really nice object. I guess it was a nightmare to get the mirrors perfect parallel to each other?! Great work!

@Mark_Estes That’s me! Thank you

I just sent you a message over there too, after I saw your comment.