How to engrave plywood covered with gold sheets?

Hi
I’ve tried recently to engrave on 3mm thick plywood covered with gold sheets. The sheets are glued on the surface of the plywood. They seem to absorb the laser power, so I needed to increase the power to get the design engraved.

But increasing the power had side effect. The design is visible on the back side of the plywood. But I wasn’t expecting that. 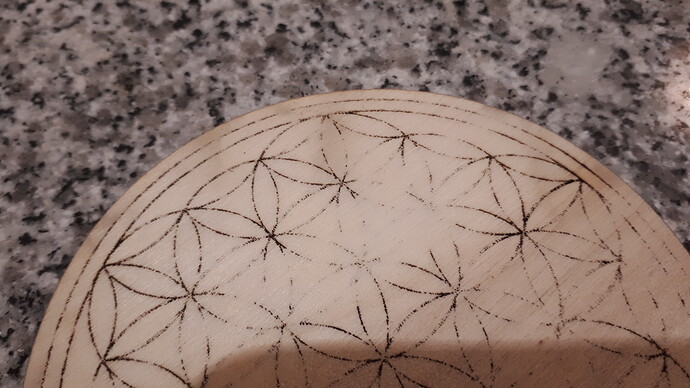 Does anyone know any recipe to correctly engrave on the gold sheets without drilling the wood?
Thanks for your advice…

I imagine that there is an energy point were the gold burns but the underlying wood wouldn’t?

Have you tried running a test job with increasing power to see if you can find a point were the beam penetrates the gold and not much further into the wood.

Yes I tried to engrave a few smaller designs before choosing the parameters, but I actually had a different result.

I also had some parts of my design that wouldn’t engrave, while others worked correctly. I mean some parts were correctly engraved (although the plywood was sometimes drilled) and some other parts weren’t engraved at all. I had to force engraving these parts, which is not easy with Lightburn.

I thought this was because the thickness of the gold sheets wasn’t constant all over the plywood, but it’s not easy to verify.

It sounds like it takes a lot of energy to ablate the gold and then this energy is large enough to cut through the plywood.

Have you considered putting the gold on a thinner substrate (veneer) and then glue it to a thicker one after the engraving is done to hide the back markings.

You could also use the process you have and glue a veneer to the back to hide the break through?

You could paint the back black to hide the breakthrough??

The photos advice were for illustration only as I don’t have any picture of the box.

Given that some CO2 laser mirrors are surfaced with gold to reflect the CO2 laser well, I expect that this is a natural limitation. I would expect that the ability to engrave at all is primarily due to microscopic fractures in the gold leaf letting some energy through, and I wouldn’t expect them to be evenly distributed.

I’m curious whether looking at it under a high-power microscope would confirm my guess, but not enough to actually do anything about it.

I wonder whether rubbing the surface somehow could abrade the gold sheets enough to make the laser reach the wood underneath more consistently without substantially changing the look?

I have 2 different layer settings : one is raster engraving and the other is called ‘filled’ in LightBurn. It fills the surface inside one or two vector lines. I don’t know if it is equivalent to raster.

I did multiple passes because the first one was ‘leaky’, meaning there were some parts of the image that weren’t engraved. This happened for both kinds of setting.

I don’t think that sanding the surface of the gold would be good as it would change the surface aspect. I didin’t try but I think that the sheets would rip apart, they seem to be very thin.

I don’t think that sanding the surface of the gold would be good as it would change the surface aspect. I didin’t try but I think that the sheets would rip apart, they seem to be very thin.

Definitely not suggesting sanding it.

The sheets are glued on the surface of the plywood.

It’s interesting that you are using gold leaf with glue. Classically, my understanding is that gold leaf has been rubbed on and has no glue to hold it.

I’m not an expert in gold leaf, but I was imagining something like rubbing it with a soft cloth, working it further into the wood grain, in the hope that it would look the same but have more opportunity for the laser to get to the wood. No experience here, just a guess.

Hi, here is some feedback.

I found out that with the gold leaves I was using, it wasn’t possible to engrave as they were glued in 1mm thick plywood, and there was no way to find a couple speed + power able to engrave without going through the plywood.

Luckily, my wife had 2 types of gold leaves, and the second one was softer, and could be engraved using much lower power. Typically, I use 100mm/sec and min/max power 20% (of a 100W CO2 laser) and I can engrave without cutting the plywood.

I hope this may help someone in the future…

Some more feedback: I found out that I can still use the other gold leaves, those that cannot be engraved. I did it this way: I first take the MDF support and engrave if with higher power to get deeper lines. Then I apply the gold leave on it, and voilà…