How not to fix a damaged nozzle

Last night i routinely started a print and walked away, like always, knowing that my printer would do its thing and and that i’d just have to pick up the printed item the next morning. Just before hitting the hay, i gave the print a quick check via Octoprint and oh my, it did not look good. The nozzle had torn through the Kapton tape and managed to drag itself over the front edge of the bed’s glass sheet a couple times, because apparently the Z-axis’ driver was failing. So for the night, i just turned off the PSU via M81 and decided to have a look the next morning.
What i saw was not pretty at all - there was brass swarf all over the front edge of the bed and the nozzle itself had an ugly edge. So i thought, well, why not give it a quick spin in the lathe and fix it right up. And after turning the nozzle down it looked prettier than ever before, so i put i it back in the hotend, heated it up and … crap. I had taken off too much, enough to have the nozzle burst but just left just enough material to give me the illusion of having made things better.
Aw well, i guess no more printing for me this year. A replacement is ordered, but with everything shut down over the holidays i guess that won’t make it here for a good while. 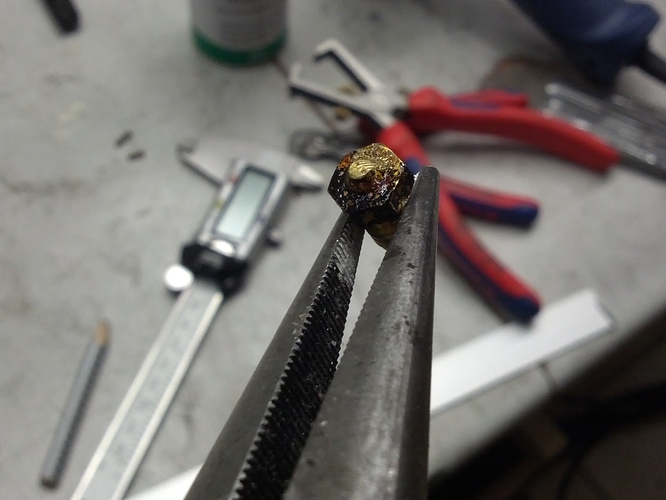 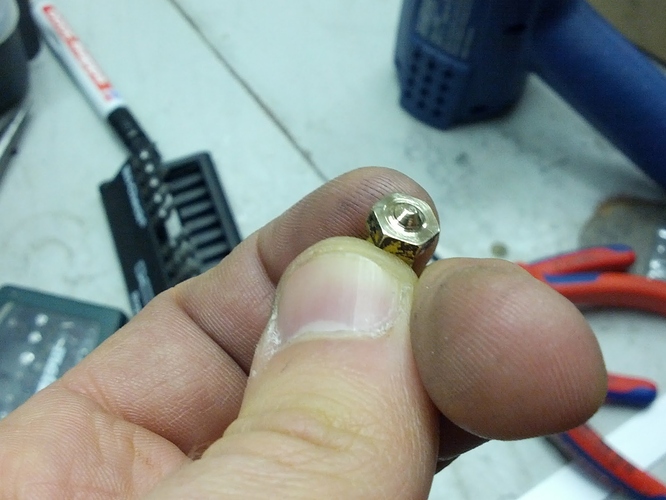 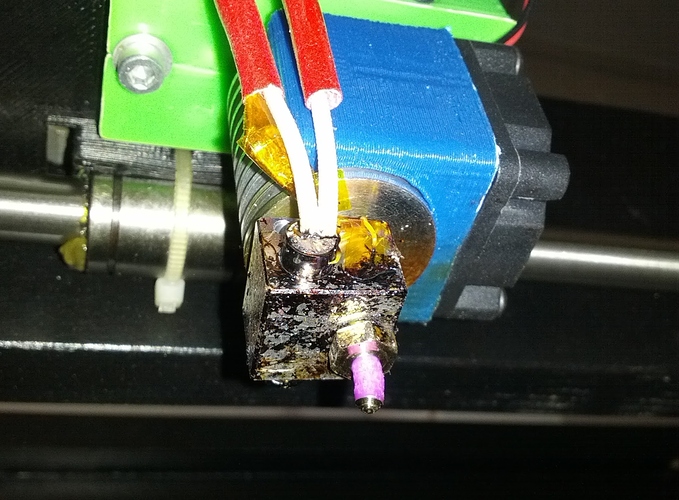 Now you simply have a 2mm nozzle!

I feel your pain. It’s 2.30 am here and I’ve just shut my machine down after a similar incident.

Checked OctoPrint and noticed the extrusion had stopped. Suspected a clog so I tried cleaning it out with a wire strand, then some unidentified nylon that just stuck in it totally. Finally got it out after raising the temp to 300C.

Unless my Stepstruder MK7 is clogged all the way up the heat break or in any other way messed up beyond reasonable repair I hope I can change to another nozzle and print a mount for the E3D bowden I’ll order tomorrow. My Stepstruder has been pretty good to me but I think I’ll retire it.

yeah I’ve got something similar, I suspect I may have to get some new ptfe tube for my budaschozzel.

@Thomas_Sanladerer if you are in a hurry, i have always spares on stock and can ship it today, think you will get it this year for sure this way. Just let me know.

@Matej_Rozman thanks for the offer! Right now I’m getting ready to turn an emergency nozzle, just to hold me over until the real deal arrives.
By the way, I just found out that E3D nozzles are ridiculously cheap!

Aww man, I feel you pain.

@Thomas_Sanladerer The first E3D nozzles were made by just taking a brass M6 bolt, part it, drill it, taper it. Screw it in tight with some pliers. Aint pretty, but it works.

@Thomas_Sanladerer no problem, just though to lend a hand. On the other hand, it would probably be of no use to you, as i can see now you use 3mm and im on 1.75. Either way, hope you sort it out, i know how it feels when things go down.

sorry to hear that.

@Sanjay_Mortimer that’s exactly what i did, i suppose it’ll hold for now. The printer is already back in business and printing away!

That sucks. I had that issue with a brand new nozzle. Got the replacement and now good to go.

@Thomas_Sanladerer nice work, what size nozzle orifice did you go for?