How do you extend a heater cartridge's cable?

How do you extend a heater cartridge’s cable? I have a couple of heater cartriges with banana plug or whatever they’re called (in the pic below) and it’s only about 15cm long so I’ll have to extend it to the board (a good 50cm maybe). What gauge wire should I look for and how would you connect it (strip the connector off? -as I don’t have the female connector for the banana thing). 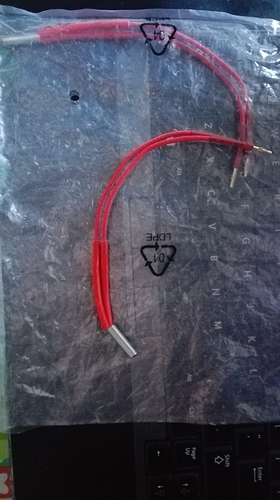 use atleast 18 awg wire and you could just solder the two connections by just stripping the wires, but i prefer to use crimps

I would remove the connector and use a barrel crimp.

Chinese ones come with 1m cable. I believe those banana things are called ferrules. Not very common thought.

it actually goes pretty tight into a barrel crimp (I’ve tested some I’ve ermoved from a ATX powersource molex connector like this one https://is.gd/QPJKpe) but I would have to make a small board to plug all the connectors coming from the hotend)

@Jorge_Robles
Yeah they are pretty uncommon, I don’t even know what specs they are I would guess 12V 40W but is there a better way to test them?

well… I hate the reliance on China and especially the time they take to get anything here (Eastern Europe).

Is there a way to find out the specs of this cartridge by measuring it somehow with a multimeter?

Yep measure the resistance while cold. Then use. Voltage = Current x Resistance to find the current it will draw.

every discussion about this is useless, if you don’t provide aditional info. We need the voltage of your system. And we need the resistance of the heater cartridge. And if you want to do it right, we need the estimated wirelength. And if you don’t care about all this and want it just safe and work, just pick 0,5mm² wire (AWG20 for the ones who can’t metric). This is good for up to 10Amps and more if really needed (but not recommended). Get the requested info or use the wire I recommended.

I’ll have 12V PSU but I have no idea about the specs of the cartridge, that’s what I am after too.

measure the resistance of the cartridge when cold.

amazing how much those heaters look like blasting caps. not to carry onto a plane OK?

@Rene_Jurack I might measure this wrong but the only setting where I get a >0 reading is on the 200 setting and I get 104 for the cartridge leads (https://goo.gl/photos/syQx4rXMTWngbGYY8).