Hot End Thermistor for a Geeetech A10

So after getting a MINTEMP error on my A10, after first setting it up, (was a loose cable connect apparently) I was recommend to get spare thermistors by @mcdanlj to have on hand as back ups.

Couldn’t find any listed on Geeetech’s site and only found a comment that it was a PT3-25E2-S2 thermistor. Googling this thermistor I found this data sheet.

I also only found 1 place to purchase them through the site listed below. Which If I’m reading it right (had to get google to translate the page) it is $2.35 USD for 500 with $8.13 USD for shipping to the US.

I put in a email to Geeetech sale and was told it isn’t listed on the site but to purchase this one for the bed and write in the comment section that I needed the one for the hot end. So $2.90 USD for 10 with $3.99 USD shipping to the US.

I like this. Do you think I should buy it?

So far not impressed with the reliability. This thread sounds just like the reason I stopped using mine some time ago…
:).

I haven’t really done much with my A10 yet so I can’t comment yet on the reliability aspect. It is weird that Geeetech doesn’t the hot end thermistor listed on their site for sale but do have the bed thermistor listed. Their sales department was prompt to respond to my request though. Will see how things go. Just a big learning experience for me right now

Any 100K NTC thermistor for 3D printers you find is probably fine here, as long as it’s not the kind in a can that isn’t supported by your hot end.

In the last four years I have only replaced one thermistor and heating element in my 3D printer. I could have gone the simple way and purchased a new hot end but what’s the fun in that! It looks like the average price for a hot end is about $20 and it’s actually cheaper on the Geeetech site.

I am glad to hear that you’re having a good experience with tech support. That is one of the reasons why I wasn’t hesitant to recommend this printer.

Any 100K NTC thermistor for 3D printers you find is probably fine here, as long as it’s not the kind in a can that isn’t supported by your hot end

So you think the resistance vs temp profiles would be close enough not to matter?

Sorry, left out one thing: Any 100K 3950 B NTC thermistor; that’s pretty universally used across these printers. And you want the whole harness, not just the thermistor itself, I’d suggest; what they are selling on that page looks like just the thermistor and you’d have to solder it to the wires. Here are some examples of the kind of thing I’m recommending:

By contrast, what won’t work with your hotend is this type:

When you get bored and want to upgrade the hotend, you can get one that takes the canister thermistors.

I was still wondering how much difference there would be between a standard 100K 3950 B NTC thermistor and the PT3-25E2-S2 thermistor. So I dug into it a bit.

Beta values are measure of the sensitivity of the change in resistance to temp or the slope of the temp vs R curve. They are calculated with the resistance measured at two temperatures. Not super accurate for determining temp from resistance, but useful for so such in narrow temperature ranges. 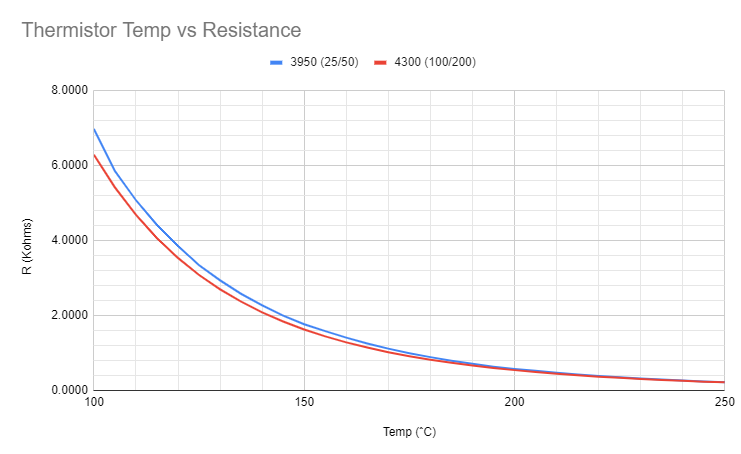 For above 150ºC they seem to be in pretty close in agreement, which is the range for a hot end you would typically be interested in.

I am wondering how 3D Printers are programmed to calculate temperature data. If they are going off a Beta value then I would hope they are using a value that covers the expected use range. Using a 3950 value when it’s calc at (25/50) is going to have a lot more error in the calc value outside that range.

Given all this, I think you probably could indeed use a standard 100K 3950 B NTC thermistor in an A10 hotend.

If I’m getting something wrong please let me know

That looks spot on to me!

You can look at the Marlin thermistor handling if you like: 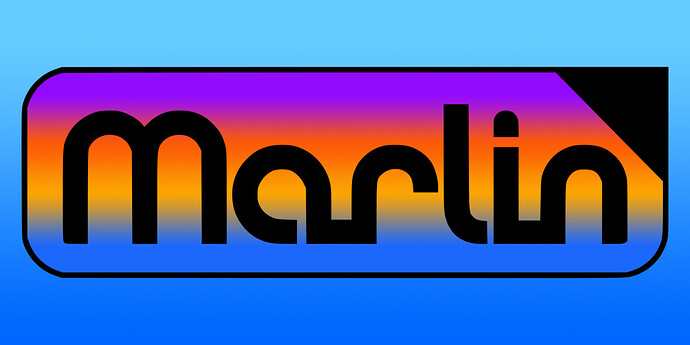 Marlin is an optimized firmware for RepRap 3D printers based on the Arduino platform. | Many commercial 3D printers come with Marlin installed. Check with your vendor if you need source code for yo...

Each temperature sensor is declared in Configuration.h as a define starting with TEMP_SENSOR_ and it’s typical for these generic NTCs to use the 1 setting, the generic 100K thermistor. It has a table mapping ADC values to temperatures in thermistor_1.h — though you can certainly look at all of them. There is a description in Configuration.h of what all the numbers are intended to map to.

By the way: if you printer didn’t include a silicone sock for the hod end, consider wrapping your block in several layers of kapton tape. It will act as a slight insulator, reducing temperature swings, and making the temperature gradient through the block smaller and therefore the thermistor readings more accurate.

Thanks for the info

I do realize I was probably a bit fixated on the accuracy, but I’m an analytical chemist by training so this is kinda ingrained into my thinking.

I’m going to be flashing a custom Marlin firmware build for my upcoming TMC2209 driver upgrade. The firmware has support for Geeetech printers baked right in. So while I was configuring the firmware I looked at the Temp Sensor setting after telling it I was using an A10 printer. It set the Temp_Sensor to 5

The specs say they are 100Kohms with a B=4300K . So some other thermistor options for stock firmware.

Going through firmware just make me realize I can easily use a standard 100K 3950 B NTC thermistor if I want to and just set the Temp_Senor to 1 for the most accuracy.

Watching the temperature during different types of prints I see that the temperature of the head varies within a C or two at the most on the setting of 5. I have never seen this fluctuation affect a print.

If any reader here sees the temperature vary substantially more than that during a print, that’s probably a sign that it’s time to do PID autotune.

Just connect with a serial monitor, send M303 E0 C8 S250 and wait for it to report what it determines to be the best Kp, Ki, and Kd (PID) parameters. The E0 is extruder 0, C8 is eight cycles (you can do more if you like), and S250 is the target temperature for tuning (you can change it to what is closest to normal for your filament).

@NedMan another reason that the Geeetech printer is a hacker’s friend!