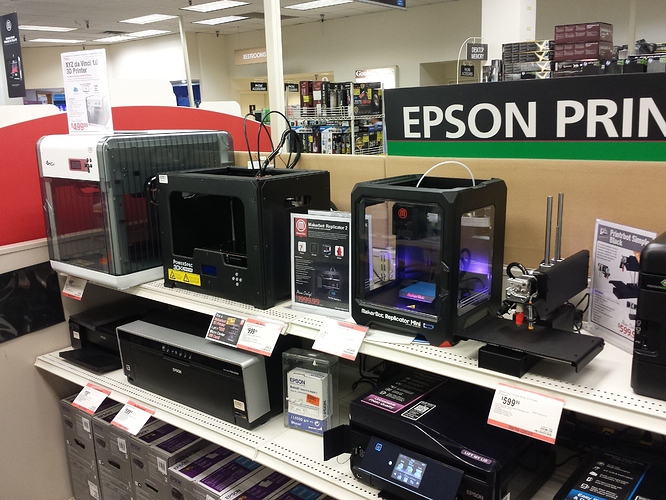 Whoa is that di Vinci. ﻿and does it look as cheap in person?

Hmm may have to run over and check things out.

It does…but honestly, how stout does an external enclosure need to look? The innards look a lot like the particleboard printer next to it, which looks like pre-closed source makerbot.

Oh, and the makerbot mini has a TINY print volume.

Toner plastic filament at $15 a roll. I have had mixed results… But at that price. I might have to try again.

Yea I havent had the best luck with toner either. But at that price it would be good for prototype iteration.

Interesting seeing them making this bet on the future of 3DP. I also wonder how the Makerbot guys setup support for them. When asked about retail support for 3D printers I identified “supporting customers to get reliably good prints” as the #1 challenge and “accessible tools for making new designs” as #2.

I bought a Da Vinci and it is cheap and kind of worked out of the box (software didn’t with my windows 8). I needed a commercial printer and that was the cheapest available. On the plus side, it does have a heated bed so you can print ABS happily. Decent build volume but the thing is big and it feels empty inside. Not sure how durable it is yet.

Got some hips for $19.00 and 4 rolls of abs for $15. I have found ABS to be slightly more forgiving than PLA from a quality standpoint. Guess I will finally try dual extrusion with desolvable support.

And on the very right, there is a tiny @Printrbot .

@Kurt_Meister a year ago, I hadn’t started making my delta…if idea seen this display last year, it would have saved me a BUNCH of money.

@Mike_Miller , haha - just gave me an idea. “I just saved a bunch of filament by switching to PrintrBot!”

The enclosure doesn’t need to be fancy to work well, it just needs to trap air and block outside air currents. I am using a cardboard box with a Mylar window, and the air inside can heat up nicely over time.﻿ I hope to make a nicer enclosure soon though. Something that’s a better fit and better seal.

I don’t regret my purchase of the Da Vinci. I definitely acknowledge its weaknesses. I will try othe brands one day. It is surprising to see them sitting on the table for sale like that. I see them sitting in people’s houses being unused.

If I had to choose I think I would get the Printrbot out of these options.

here’s a question about the PowerSpec printer. Is it basically a no name printer that companies can put their own name on? It looks the same as the MonoPrice printer.

@D_Burroughs , if you haven’t noticed - that was the last “open source” Replicator that MakerBot released. The whole reason they went closed source is because of people copycatting their design. It’s not a no-name printer, it’s a pretty name brand printer that everyone keeps copying.

@ThantiK but isn’t that the whole point of open source? People copy each other design then improve on it. Going closed source after you joined and flaunted open source is the same as stealing.

The main difference is the extruder in those. They are usually close to the ones that robot dig is selling.