Hi K40 family.
I have been using the K40 for about 6 months. After this time the laser lost its power so instead of replacing the tube I just bought a new machine.
The new machine has an issue! I’m not surprised!
When cutting a continuous line, the machine will start quite strong, but the laser strength will continually decline as the line is being cut. At the beginning of the line, the wood was cut through, by the end of a line the laser hadn’t even marked the plywood.
I’m thinking the power supply is dodgy, what are your thoughts? 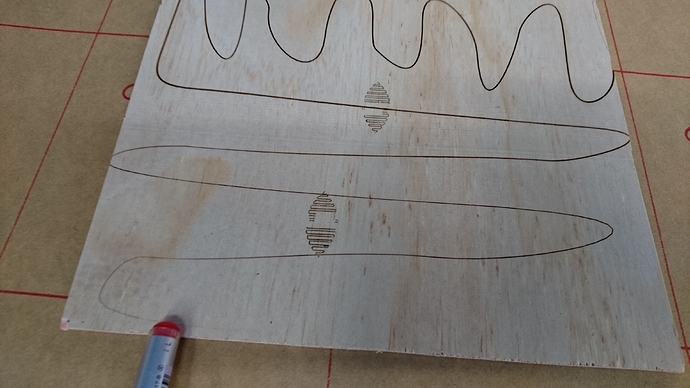 Just a note, the laser is aligned perfectly. The issue isn’t alignment.

You did a four corners test? Also what is your water temp at the beginning of the cut and toward the end? As the water gets warmer the tube will lose power

You say perfect alignment but is your focus the same all around the bed?

Hi mate,
Yep, laser works well at all 4 corners. It is the long continuous cuts that are the issue, alignment and instantaneous power is okay.
Water temp is constant at about 10 degrees. I was using the same cooling set up on my previous machine without drama.

1mm or less can affect the cut along the bed

Is your mA gauge dropping as it does the long continuous cuts? That would indicate power being an issue if so.

Does the size matter when you do those tests?

mA meter is constant. It is 28mA through the entire cut.
This is fairly high compared to my old machine. My old machine was 21mA max.

@Anthony_Santoro I am pretty certain you shouldn’t be running the power higher than 20mA. Could be that the problem is that you are running the power too high & it is unstable at that power level. Try 10mA & run the same cuts & see if it drops power towards the end of the cut.

agree with @Yuusuf_Sallahuddin_Y What thickness its that ply? Why you need so much power for that cut?

On my old K40 I always had the power at max. I assumed that this machine would be exactly the same. I even purchased it from the same seller.
I’ll try to dial down the power to about 20mA to see if it can sustain the cut. I’m out of the house at the moment but will try soon.
Just trying to cut 3mm ply. On the old machine it was cutting at max power at 11mm/s in a single pass when I first purchased it. After 6 months of heavy usage the tube lost so much power that it wouldn’t even cut through after 3 passes of 6mm/s. Same plywood.

Maybe I’m missing something important in the alignment.
I got all 4 corners hitting the exact same mark. I did a ramp test to find the perfect cutting height then cut 4 chocks to hold up the ply.
(the original cutting platform was removed.)
What have I missed.
By the way, thanks for your advice everybody. I really appreciate it!

You could be hitting the inside of the cone on exit, that will reduce power buy a lo.t Rotate the laser head a tiny bit left or right and do a test fire. You should see a difference

Thanks mate, will try.

Are you in Melbourne?