Hi, I am having issues where the gcode will sometimes not load into the

Hi,
I am having issues where the gcode will sometimes not load into the gcode widget when I drop a file, but the file shows up on the 3d viewer everytime. 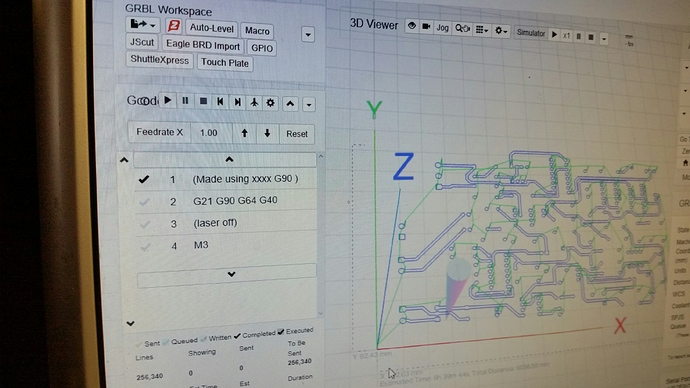 The drop down menu will also not reload the file or open it in a new window.

My gut is telling me you’re getting a Javascript error on loading the file and the error occurs at 3D viewer, when then craps out and the code for Gcode widget doesn’t get executed. Can you look at your Javascript console and see if error is showing?

I also tried to copy the link and paste into a new window and there was nothing copied.

Try reloading then. Looks like your browser didn’t load all dependencies.

Reloading would not clear it. I had to erase all browsing history.

I have used Firefox, Microsoft Edge, IEX and I’m on Chrome now.

It may be that the require for jquery resizeable is pointing to the wrong resource in the grbl workspace. Do you still get the error after emptying the cache?

No I do not get the error. I have to run Chrome in (incognito mode). Or give the browser a fake drive to store the cache. Other problem I have is that I’m not able to pause, it seems to just keep feeding the buffer g code.

I wonder if your “last-imported” is corrupted. Try deleting the localstorage for http://chilipeppr.com in your browser resources tab. Ctrl+Shift+J in Chrome and then find resources folder and delete “last-impoted” local storage key.