Hi guys, here’s a friend’s print.
What’s the cause of it screwing up?
Thanks 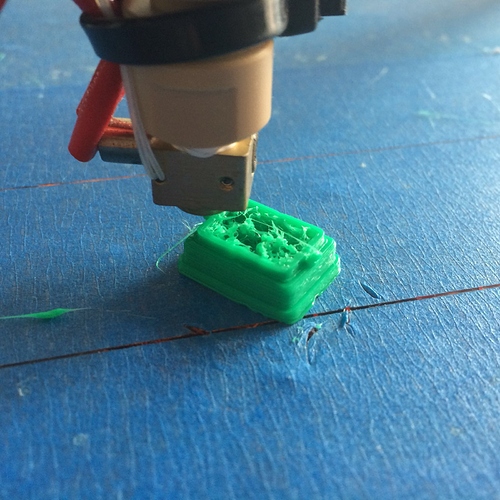 It looks way to hot. If it is PLA the printed part needs cooling. Also check if extrusion temperature is correct.
If that is not sufficient i would lower speed to see if it improves the print.

Yeah how would we know without posting any settings? Also how are we suppose to know if your bed is level or how tight your belts are? Or if you have updated firmware? Or if your machine is calibrated? Or if you have a heated bed and what temps are you using? Many things to consider…PS personally I use glue stick instead of blue tape right on a mirrored glass! Gives it a real nice shine on the first layer!

@Bjorn_Marl , I am getting the settings from my friend. Thank you

@Scottie_D369 , bed is level, as I have seen it.
Even if bed was uneven, it should not result in the lumpy result when printing the infill.
It’s a Deltaprintr, on fishing lines, no belts.
F/w is updated. Calibrated.
It’s not mirror glass. It’s acryllic.
Your comments are irrelevant to my post.
I am not an expert, but I know I am right on what I have just said.
Dun worry, I am not keen to get in any argument with you.

ok then there “could” be a clog somewhere?

such small parts need to get cooled well. Easiest way to achieve this: printing the same part 2 or 3 times more simultanously.

If you have access to a proper thermocouple check the temps. I had an issue with the hotend that originally came with my printer where the temps where out by about 15 degrees, once I was aware of it, it was just a matter of taking into account.

All comments about heat good, but maybe also change some infill settings. (edges look “ok”) Maybe also try rectlinier instead of the large honeycomb. I get problems like that when I use low infill and honeycomb.

Speed comes with a cost, the layer underneath is not cooled enough for the next layer to be deposited, and not enough retraction might caused pot holes that obstruct the next layer to be laid down flat and perfect, increase the amount of infill, or slow it on the infill (you should decrease the speed on small perimeters too, it might jitter about)