Hi folks, Can somebody help me integrating this widget into grbl workspace?

Can somebody help me integrating this widget into grbl workspace?

I searched source and found out it’s a workspace for tinyg, but I don’t know how to implement it in my workspace since theres no example code for chilipeppr.load() statement on github. 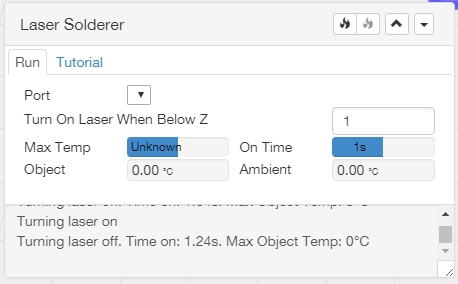 There is a youtube video eplaining that, you’ll find a link at the end of ChiliPeppr home page.

@ameen.nihad There is no chilipeppr.load() code from readme in github. Here’s the link

The laser solderer widget for ChiliPeppr that uses an Arduino to control a laser with an infrared heat sensor and a PID to ensure accurate soldering.

This widget has no runme.js, it might be an old widget that no longer work with current workspaces, not 100% sure.

This is an old widget that doesn’t follow the newer widget format, but the reality is this widget is defunct. I could never get it to work, but not because of the widget code, but due to the IR heat sensor PID loop not being fast/strong enough.

@jlauer I just need to turn on/off functions because I plan to mount plasma on my router. Arduino will be connected with relay which will turn on/off plasma torch. I forked this widget from jsfiddle and deleted these unnecessary functions, and I hope everything is working fine, but dont know how to put it in new workspace. I hope we can make this widget since everybody will be able to cut metal with plasma.

@Amer_Sarajlic I think the broader issue might be how you want to turn your plasma cutter on/off. Many folks just use coolant on/off or spindle on/off because it’s the simplest approach. The Laser Solderer widget was using a watching of a Z height to send a string command to an alternate serial port. This worked ok, but it had enough of a delay in the roundtrip of about 250 to 500ms that it wasn’t ideal. The nice thing about spindle or coolant on/off is that it’s immediate. If you need something fancier I suggest using the Cayenn protocol which extends the coolant on/off to support multiple devices. You can watch my video here of how this works. https://www.youtube.com/watch?v=SlHhcErWCDQ

I thing the solution is to fork the sample widget then add the functionality of your widget … just a matter of copy/paste. John might have a better solution.