Hi Everyone, I want lo light up 1st led but first 2 leds lit 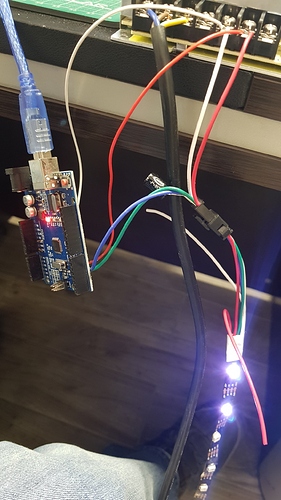 maybe your DATA line is broken . make sure you set in the arduino a currect LED number

Please give us more info to try to help you.

What type of LEDs are you using?

Upload your code to http://gist.github.com and share the link to the code.

you forgot to hook up the other wires. That’s your problem. Look into wiring and code for that particular strand.

@Scottie_D369 The loose ended white and red wires in the photo are extra - and + connection points (where power could be injected on longer multi-strip runs). Power looks to be hooked up correctly. Are you seeing something else missing?

Maybe it’s the code then you are trying to run. You have to try many to narrow it down to what works. I don’t own a strip like that but I have had issues in past and all I did was play around and look for many others code. Sometimes code won’t work cause not enough power. Or you have too many leds for particular code. Something isn’t addressing right.

@Murat_Yavas Can you share a clear close up photo of the strip connection solder pads so we can see the pad labels?

can you make a closer photo? and what are the labels ?

Looks like WS2813, tried using that in the addLeds call as the LED_TYPE/CHIPSET?