hi all, I would like to have some advises prior to starting a project.

hi all,
I would like to have some advises prior to starting a project.

The project is divided into two parts:
first part is composed of two x 1meter led strip, that should be linked, i.e. controlled together. imagine it as each led would be used for one sound channel (one for left, one for right) and i wish to have some effect in link with sound (UV meter etc). plugged to 5v or 12v, depending on what is the difference between each ? I wish to control via them a remote controller to choose between some predefined effects but also, when needed via glediator, over wifi.

My questions are basically to understand:

finally, where would the fastled library fit it here ?

thanks a lot for your precious help !!
I have been lurking for a while and finally decided to start my project and hopefully finish it to share it here as well alongside big names like Yves

Is this your first project of this kind?

@Sam_Guyer I played around with fastled 3years ago, and it was with some w2810 at the time if I remember. didnt touch anything since then, so not sure how it evolved nor which led strip are the nice ones to have currently. At the time it was simple “plug, upload and play”. Coding shouldnt be much of an issue here, especially considering the library, however finding the right components with wifi, remote and power supply is my challenge

Sounds pretty ambitious! How many LEDs altogether? I would recommend starting small, get everything working, and then scale up. Managing power can be one of the most challenging aspects.

I get a lot of stuff through Ali Express – direct from China. I like the WS2812 strips because they are cheap, but the timing can make it challenging to control a lot of LEDs.

The number of LEDs will also determine your choice of microcontroller because you need to have enough memory to store all of the LED color information.

@Michel_G_Khoury that is a ambitious work.
I agree with @Sam_Guyer maybe start first with the 2meters part. This way you will have an idea of everything that could be possible.
Are you gonna use 30/60/144 leds per meters strips ?
In term of power you need to consider the number of leds P=number50,06 if you are using ws2812 under 5v.
You will have roughly 22meters of leds with 60led/meter you will need 80A then a 400W power supply.
I do advice to power each led strip separately. On the link below find advice to wire the ws2812 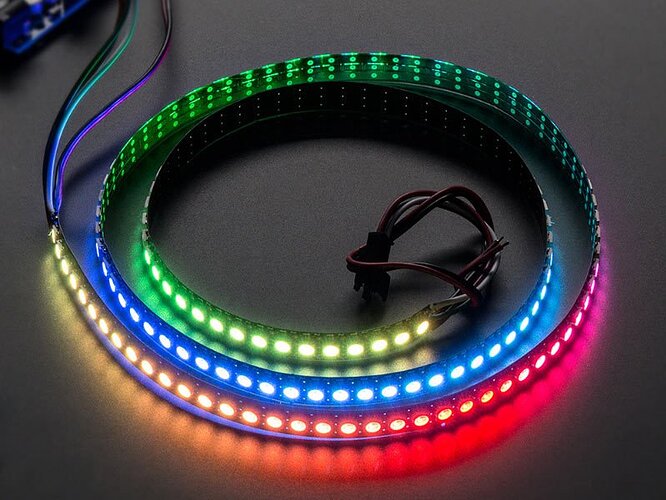 NeoPixels are “intelligent” full-color RGB LEDs that can be controlled and chained from a single microcontroller pin. This guide presents an overview of NeoPixel products, along with tips for building and powering projects of all shapes and sizes.

You talk about remote control what kind IR ? Bluetooth ? WiFi.
You talk about glediator via wifi.
I would try then a board WiFi integrated.

That seem super super cool project can’t wait to see the finished result.
Do not hesitate to ask questions

Buy your LEDs direct from World Semi, that way you don’t end up with some crappy clone. They are as cheap as anywhere and at least you’re supporting the development of future products: http://world-semi.com - WORLDSEMI CO., LIMITED