Hi all , I am planning to build a core xy gantry based 3d

I am planning to build a core xy gantry based 3d printer. I also want the belts to cross over at the back where the motors are placed

Do you think the below diagram will work ? 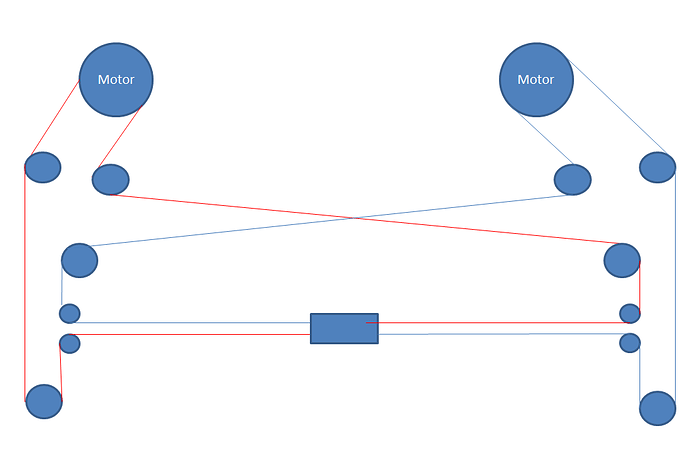 Also wanted to know if the torque required for the motor will be higher since the number of idlers have increased.

Would the ramps 1.4 be able to handle this or do I need better stepper drivers like the TMC2130

My style is jump in and try what you have. So many variables and unknowns, so go for it. I think you will be fine and you can always upgrade.

both are working, but the second is the better.
missing/deleted image from Google+

@Jakab_Gipsz The first is actually a H-Bot and not CoreXY…

It is best to keep the belts parallel, btw

@Romeo_Pavel
There is some confusion in your information!

H-BOT means that the two stepper motors are fixed and the belts move the head.
The frame forms a “H”

If the two motors move horizontally, then CORE XY https://www.youtube.com/watch?v=pAvWq0DD8uE

If the two motors move vertically and horizontally, then CORE XZ

That’s why it is wrong to say that this is a CoreXZ conversion because it was before it. It only led the belt differently, improving the unwanted movement of the X axis. I would say: 1 belt 2 end is converted to 2 belt 4 end