The goal is to make a battery powered trippy light that will hang from the center of a pop-up (EZ UP) tent at a music festival, and I need some help flushing out my ideas. I am a software engineer, so I am not worried about the programming side. I only have basic experience with arduinos, and zero experience with addressable LED (I have some samples in the mail so I can start playing around). I am also comfortable with basic soldering.

Check out my rough sketch and basic idea linked below. Basically I want to get a 8" mirror disco ball suspended in the middle of a bicycle rim. The mirrored disco ball will be attached to a slow moving motor (example = https://www.amazon.com/American-M-Hdac8-Mirror-Ball-Motor/dp/B0009O116Y ) .

I want to line both sides of the bike rim with addressable RGB leds. I am thinking I could widen the spoke holes and push leds through the rim towards the center. These would illuminate and reflect off the mirror disco ball. From my initial research, something like this seems like it could work. (12mm Diffused Thin Digital RGB LED Pixels (Strand of 25) [WS2801] : ID 322 : $39.95 : Adafruit Industries, Unique & fun DIY electronics and kits)
Pointing out away from the center, I thought it would look cool to use the higher density LED strips like neopixels.

Currently my most concerning unknowns

Current Progress
I have the mirrored ball and bike rim. The rim has a circumference of about 68 inches, and its either a 32 or 36 hole (haven’t counted yet). I also have an arduino Uno.

Depending on interest, I have plans of sharing my build process and code for others to improve upon. 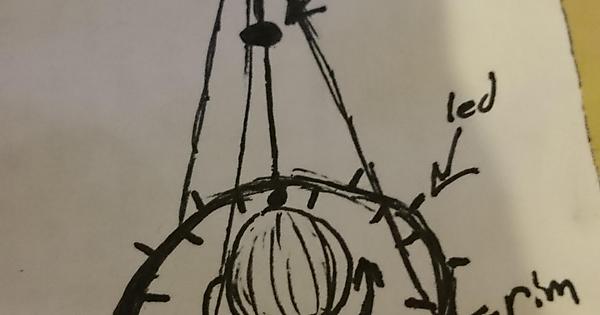 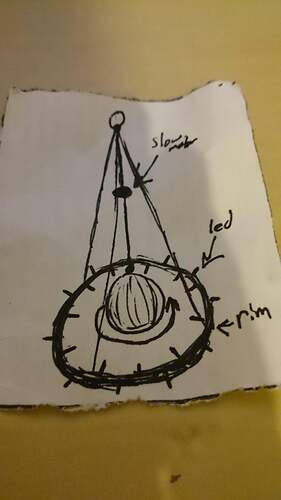 r/arduino - Dreaming of a Psychedelic Chandelier

That’s good news, so no red flags in my initial idea?

I’m not an expert but I see no reason why you can’t do what you want?

Your main problem is having the first pixel so far from the controller. Use a small controller, like an arduino pro micro or a teensy 3.2, and secure it to the backside of one of the LED strips. That way your controller is close and you are just running power a distance of 10-15 feet. Depending on the number of LEDs and the current draw you will need to increase your wire gauge to make sure 5v is making it to the strips. One thing to note: if you use a Teensy 3.2 you will need to apply power to the VIN which has a voltage regulator. My recommendation for LED strips is 60ppm WS2812b strips. They are easy to work with and forgiving. I would use two strips each with their own data line. Make sure to inject power and ground at the beginning, middle, and end of each strip. This needs to come straight from the power supply and not from the micro controller. My last suggestion regards the string that suspends the wheel rim. I would make it rigid if possible to keep it from spinning and twisting your power lines. I know it will make for a more difficult build and will take up more space when transporting, but festival goers are not known to be smart and respectful people. It will take one enthusiastic person to spin your bike rim to break everything. Good luck and share pictures.

You should look into an ESP8266 based board so you can control the LEDs via WiFi. The ESP8266 can be programmed to run as an access point, then you can just connect your phone to it and access the board through the web browser. One of the other members here wrote up some nice code that you can use for all of that.

Other than that it sounds like a cool project and I’m looking forward to seeing some video/pictures of the finished project.

@Brian_Lewis ​ good idea!
I use an esp8266 on my 256 led matrix.
The AP and web config makes it a real treat to tweak without pulling out the ladder

@Brian_Lewis I was just thinking about wifi or bluetooth! I was trying to figure out how I could change the “show”. I feel like it would be neat to have the lights respond to the music playing, but also play with some other visuals.

@Matt_Richard Woah thanks for all the suggestions! For the rigidity of the rim, I was thinking about recycling some worn out bike chains and attaching them so the chain’s pins would be parallel to the rim. I was thinking this would allow the support to collapse vertically and limit the twisting/spinning.

I use an adafruit feather bluefruit board (bluetooth) for one of my projects. It works but I feel it is limited compared to what you can do with one of the WiFi boards. The ESP8266 boards work very well and can be clocked up to 160MHz. If you are able to get audio to your project via an aux cable you should also look into an MSGEQ7 board to analyze the audio. Plenty of good stuff on this forum with examples on that too. Most of my projects use the MSGEQ7 and it makes for some very neat effects.

You could also look into using FFT for audio analysis via microphone. I’m not familiar with it how well it works using a mic for input though.

The music festival is at the end of the month, so I will need it up and going by the 24th. I will probably aim for a minimum features list and work to get things stable. Then start adding on and evolving the idea

I am looking at ordering some WS2812b strips from Ebay. Is there any difference in light quality for waterproof and non-waterproof? I am not planning on using them in the rain or wet conditions, but I wonder if the waterproofing would make them more durable?

I don’t think the waterproofing effects the light output by any noticeable difference. I would recommend buying strips with the water proofing and then if you decide you’d rather not have it you can take it off the strip. Buy a strip with IP67 rating and not IP65. The IP65 strips i’ve seen don’t cover the back side of the strip.

The best waterproofing is IP68, but it is much harder to solder. It is essentially the IP67 casing impregnated with silicone. It is also much harder to find. What is the music festival? I agree with @Brian_Lewis , get the waterproof strips. Anything outdoors will breakdown after awhile if it is not water proof. If this music festival happens to be burning man, definitely get the waterproof strips. The dust eats electronics.

Thanks for the tips! I will go with the IP67. Thinking I will order 5 meters of WS2812B (60PPM) from a US based Ebay seller. Hoping this will cut down on delivery time and still keep the price down a little. I don’t plan on using all 5 meters, but something tells me this won’t be my last project…

@Matt_Richard and the festival is Lockn. It is at the end of August in Virginia. http://www.locknfestival.com/

I have been spending sometime with FastLED, and having loads of fun. I set up a quick test using the strand of WS2801 leds poking through the spoke holes towards the mirror ball. It seems like the leds are too diffused and fail to create the reflecting squares of light around the room. The 12mm leds and wires also take up a good bit of room on the rim. I am starting to think about other options. Does anyone have other ideas of what might reflect off the mirror ball better?

Need some recommendations for which boards/components I should order. Looking for a small microprocessor + wifi (ESP8266?) + microphone and any additional chips that would be needed to process music. I am hoping to have all of the above attached to the rim. I will be using all 5v lights. If its a pick 2 of 3 situation, I would drop wifi. The current plan is to drive 36 WS2801 and a little less than 210 WS2812B (2 separate strip arrays)

Wemos D1 mini (ESP8266) $4 from their main site on aliexpress. If you can get an aux cable from the sound booth to your project I would recommend an MSGEQ7 board for audio. If you’re looking to only use a mic then I’m not sure what your best options are as I’ve only used the MSGEQ7.

@Brian_Lewis Thanks. For MSGEQ7, we will be playing music from my homemade boombox. Do you mean splitting the input line of the boombox? So example would be ipod to a Y splitter with the boombox amp and the MSGEQ7 on either end?