Hey folks, can anyone point me to a decent chip that might be compatible

Hey folks, can anyone point me to a decent chip that might be compatible with FastLED and just does basic TTL PWM? I want to control some big non-addressable RGB strips as separate channels and would really prefer to just drive them with some power mosfets, but I’m having a hard time finding a decent option.

I know that 595s were supported in the past, and I could always roll my own PWM loop or use an old version of FastLED, but it sure would be nice to have something drive my PWM for me.

Somehow I can’t seem to find datasheets on all of the currently supported chipsets, and I’m slowly drifting out of my depth trying to determine a good option, so if anyone can point me in the right direction it would help me out a lot.

I should add that I’m fully prepared to hear that I’m barking up the wrong tree, pick up a bunch of 595s and go about it some other way. I just really like FastLED

@Erik_Stambaugh Have a look at the comments to another recent post from TAK NIE.

You could use a WS2811 chip and just build the high current driver you need !?

If you’re going to go with your own chips, I’d say go with the LPD8806. Mostly because I’m trying to encourage less, not more use of the WS2811 (@JP_Roy it’s a terrible chip, and a terrible protocol - and every time someone actively advocates for it’s use god kills a kitten, or in your case, blows/shorts out an led).

595’s aren’t supported anymore because 595’s required driving the PWM on the host MCU - which required a whole bunch of timer games that I’ve since elected to yank out of the library.

@Daniel_Garcia I understand and agree mostly but… honestly… it is not that bad of a chip… tis working quite nicely, tis cheap and actually saves a whole wire…

@JP_Roy and @Daniel_Garcia – Wait, are you saying that I can drive a full 5-meter LED strip directly from a WS2811? Because I already have hundreds of these but the datasheet seemed to imply that this wouldn’t work and I never built up the nerve to try it. Though if the LPD8806 is a better option, I’m happy to pick some of those up.

It isn’t quite as simple as that

I believe you will fry the WS2811 if you try to push 5 meter’s worth of led current through it. This is where my knowledge of electronics starts to falter, but what you’d want it something that can switch power on and off rapidly based on a line being high or low (so, something like a transistor, but that can handle pushing stupid high amps through it - mosfet, maybe? There are others here with better electric chops than I

Euhhh… no… that is not exactly what I said.

What kind of strip are you talking about ??
How many LEDs?? what type ??

What I was thinking is that you may need some additional driver circuit either after the ws2811 or the LPD8806. But I am not sure what that driver circuit would look like to drive 5 meters worth of LEDs !?

It’s a non-individually-addressable strip of SMD5050 RGB LEDs. The kind where the whole thing acts like a giant 12V common-anode RGB LED. I need to have big bright panels of color, so I’m using whole strips of these.

That’s where the WS2811 sort of fails as an option for me-- from my weak understanding it’s not impossible to drive these strips from the 2811, but it gets startlingly complicated. I’m really just hoping to drive some power MOSFETs so that I can handle all the current elsewhere

12V at up to about 6 amps I believe, based on specifications I’m reading online. I assume that means 2 amps per channel. A lot, essentially.

You asked for something that is (currently) supported by FastLED AND would do PWM for you. Either will actually do it !

The BIG problem is in that high current driver circuit you will need for these type of strips.

Well, I asked if anyone knew of a chip that would modulate a TTL signal instead of trying to direct drive LEDs. I might be asking for the wrong thing, but I’m starting to be convinced that there isn’t a good option for this.

There are folks out there who have hooked up their own lpd8806’s to a variety of LEDs, including high power ones - but it’s not a direct tie, so you’ll need some extra circuitry no matter what.

Whatever chip you are using, I recommend for common Anode LEDs 3 N-Channel LOGIC LEVEL (!) MOSFETs like these:

If you've ever wondered how to control the headlight of a car from a microcontroller, a MOSFET is what you need. This is a very common MOSFET with very low 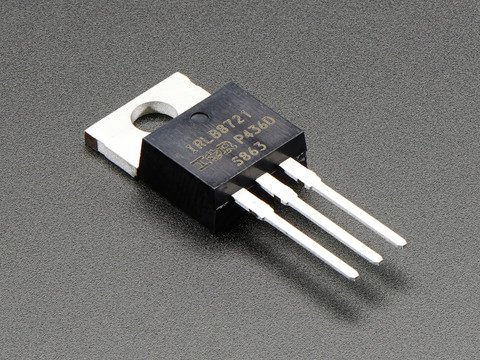 When you need to switch a lot of power, N channel MOSFETs are best for the job. These FETs can switch over 60A and 30V and are TO-220 package so they fit nicely into any breadboard or ...

http://www.diyledexpress.com/index.php?main_page=product_info&cPath=36_13&products_id=213
If you want to control hi-power led
PWM the 3 input to drive 3 channel RGB of led strip

Or this
Cheaper and ready for PWM input 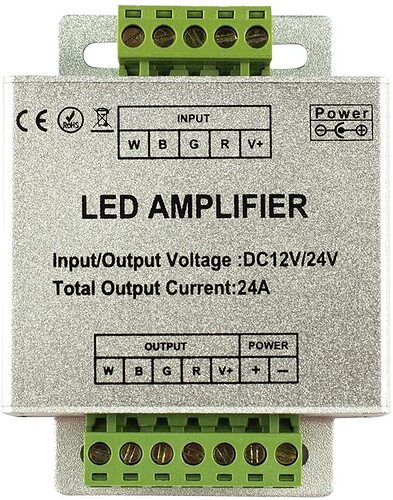 The WS2811 is indeed capable of running higher power strips.

I made a pcb that drove a 10w RGB led at constant current using a hex inverter, bus resistor and an LM7805 (unnecessary) and a CAT4104 (led driver) from a 12v supply.

The WS series are all current sinks so in order to drive a high enable the inverter was necessary in conjunction with the bus pull-ups. The same thing could be used to drive a standard MOSFET and control your RGB strip just as well.