Hey everybody. Does anybody here have any experience in building a filament extruder?

First things first: Building a filament extruder is hard, especially when you want to get some quality out of it that is actually usable. I started building mine over a year ago, sinked over 500€ into it and am still not at the point where i would consider it “done”. Still, it’s probably already better than one of the minimum-effort filabot-style extruders.
If you’re dead set on building an extruder, i’d suggest starting out with something like a Lyman extruder, but honestly, i’d just buy a roll of filament to get your printer dialed in and going with that - there are enough potential issues in getting started as is, and not also having to fuss with filament can make a huge difference there.

Well yea, we’re dead set on building an extruder. The thing is, we don’t just need the filament to test the printer, we’re planning long term. We’ll probably end up buying some filament any ways, for comparison’s sake, but we plan to produce our own filament sooner or later.

https://www.thingiverse.com/thing:265375 is probably what you want then. Keep in mind that it’s not going to make perfect filament.

And what would be the risks of not having the perfect! filament? More problems when printing? Or not being able to print at all?

The main issue is going to be diameter consistency; if you end up with a spot with a diameter that is too large, you’ll jam the hotend, if it’s fluctuating too much otherwise, your prints will end up with ridges and a generally inconsistent quality.
Most commercial vendors specify ±0.1mm as the diameter tolerance - if you actually used filament that was that inconsistent, you could calibrate your printer as much as you wanted and still wouldn’t be getting nice results.

Why not include a non-contact diameter gauge as feedback to control extrusion/draw speed? Or do you do that already?

@Damian_Poirier non-contact is expensive if you want any kind of decent resolution.
I’ve come up with a near-zero-force sensor to measure diameter after the filament has cooled, as measuring it when it’s still stretching won’t get you usable readings anyways.
Still, for just that part you also need a custom control algorithm (PID won’t work well).
But before you even bother with diameter feedback, you’ll have to regulate the drive motor’s RPM as well, and for that you can either use a €500 servo and gearing assembly or a custom-made solution that you sink countless hours into.
Those are the two main issues that make the difference between filament that will somehow print and filament that will out-perform the store-bought stuff.

How about going to: http://www.filastruder.com/ and looking at their products. This was started from a Kickstarter project and there are plenty of them in the field now. They also have a winder that eliminates the mess on the floor. You cann’t build any cheaper that this and they have links to sources for pellets and masterbatch.

@Christopher_Benjamin first of all, virgin ABS pellets are 2€ / $3 per kg. Unless you’re shredding bags of failed prints at a time, recycling only financially makes sense for the bigger recycling companies.
Since you’re probably over-heating or cooking the plastic at some time (most likely in the printer’s extruder), the plastic will degrade with each round. ABS and PLA will both become increasingly brittle, while PLA will also start composting much easier than non-recycled filament.

Expensive? I should think a laser pointer and a webcam’s ccd (lens removed) would be enough. Maybe I’m wrong.

I would disagree about quality not being good enough - I’m a bit biased as I created the Filastruder, but all the users I’m aware of report tolerances of +/-0.05mm@1.75mm or better (usually better) with ABS. PLA is a little trickier as the pellets must be dried adequately first, but without a doubt great prints are possible. Here’s a couple prints from one of our users: 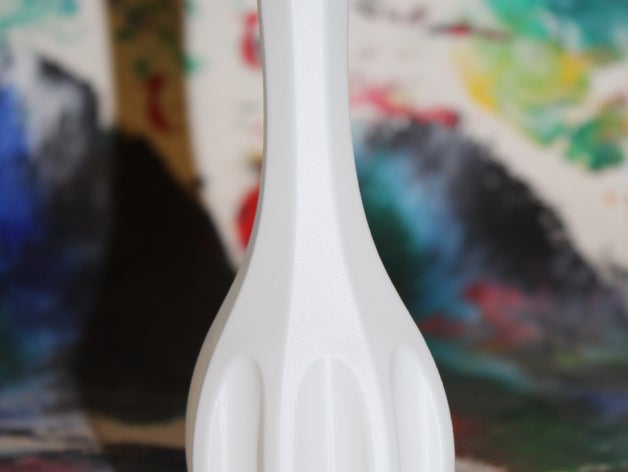 Great Design! My girl friend stole this from me shortly after taking the photos. Made with my Solidoodle 3 at .15 mm layer height and .3mm extrusion width from a .25mm nozzle. Using filament made at home with my [Filastruder][1]. [1]:...

I have personally made over 70kg of filament, and I believe it was all on par or better with all commercial filament I’ve used before.

Thanks everyone for the input!

We’re thinking of building something similar to the filastruder. We’re not buying the extruder because we have some spare parts (motors, shafts, bearings, toothed belts, and so on) that we plan to re-use both for the extruder and for the printer later on.

We don’t need perfect resoults from the first go, “good enough” is good enough in this phase.

Could someone help me with some details regarding the nozzle geometry and motor specs (torque, rpm)?

We want to use a Ø20 wood drill for pellet transport/push (like these: http://img.diynetwork.com/DIY/2011/02/23/RX-DK-DIY054037_wood-auger-bits_s3x4_lg.jpg). Any observations regading this? Too large, to small, different geometry?

I’m using a 20mm auger on mine, but i’m aiming for a throughput of about 1kg per hour, which it is fairly close to at 15RPM. However, finding a motor provides enough torque at those speeds is hard, so i’d recommend a somewhat smaller auger if you don’t need the throughput as it will greatly reduce the strain on your drive motor.

What torque are we talking about at 20mm/15rpm? Just to have myself a reference…

Rough ballpark: around 20Nm. Though i have a rather long melt zone, which might add a good bit of drag.

Thanks. I’ll have to check what motors do we have or what can we easily find and i’ll decide on the auger based on that.

Would you recommend a long melt zone? I was planning to use a heat collar of about 60 mm long (that’s the longest i could find) that’s capable of delivering up to 400 degrees © heat.