Hello,
First time posting in here…
I’ve got some SK9822’s that I’m trying to hook up but I think there is something that I’m missing / not defined correctly. I’ve tested both strips with a stand-alone tester and they work fine. Both exhibit the same issues, I am hoping someone has seen this behavior and knows what to update.

Strips are running off of a Teensy 3.5 hooked up to an Nvidia Shield using the app “Android Ambilight Application”. This worked with WS2182’s but I saw inconsistent colors so I got rid of that and wanted to “upgrade” with the SK9822’s. 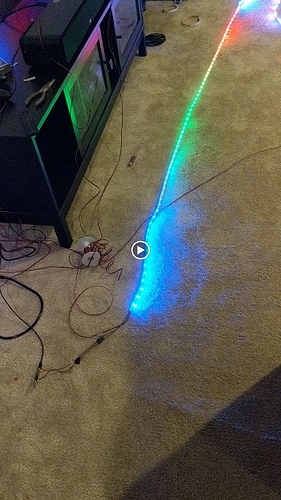 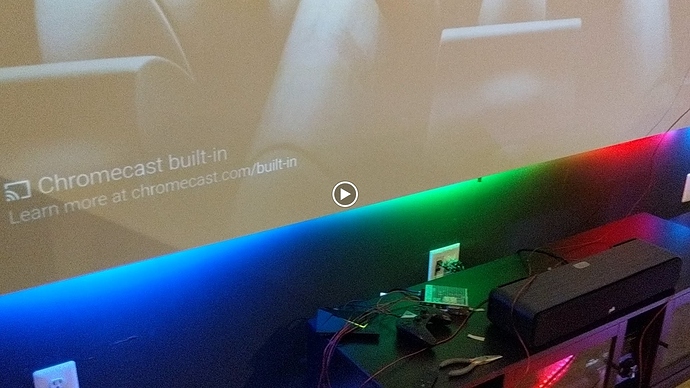 Hello and welcome!
From the first video it looks like you are powering from both ends, yes?

What does a volt meter read at each end across the pos/neg connections of the strip? And then what does it read in that middle area where it’s flickering?

If the power has dropped too much you might need to do another power injection in the middle there somewhere.

@marmil yes that’s correct, power from both ends. There are 140 LEDs total on the strip. I will try checking the power but I think it is okay as my stand-alone tester was simply wired up to the end I had the teensy 3.5 connected so should have the same power.

Looks like a data speed issue to me
try turning the data rate down to 12Mhz or even 6Mhz, you can go as low as 1Mhz (the same as the adafruit library).

You can also try defining the LEDs as APA102Cs.

@Jeremy_Spencer Thanks! I was eye’n that line but wasn’t too sure what to do with it… I’ll try that this evening and let ya’ll know how things go…

Got it working! Thank you for the assistance. Primary reason was I was not using pin 11 for data on my teensy. I also had to adjust the data rate to 6mhz as Jeremy suggested.

Just need to clean up my wires and tune the colors some.

If anyone is interested in this setup let me know. I am going to contact the author of Android Ambilight Application again to let him know what had to be done so he can maybe make some minor adjustments to his code so the variables are more easily adjustable. Also, so the changes required can be documented.

Super. And thank you for the feedback.

Same issue with some of these as well. Better power distribution and adjusting the MHZ solved the problem

Just out of curiosity because I’ve replaced that previous strip and changed to a setup of 60 LEDs per Meter and I get flickering at DATA_RATE_MHZ 6. Which I don’t believe was an issue on my previous 30 LEDs per Meter. I’m only covering the sides of my screen so it actually has less now… 100 per side…

What exactly does DATA_RATE_MHZ impact? for 200 LEDs is it really going to be obvious by turning the MHZ down even more? The issue I’m having is if I put the LEDs brighter they flicker and I don’t believe it’s a power issue I’m running off a 200W power supply feeding beginning middle and end.