Had a great start but now I'm stuck on Mega2560/GRBL

I’m probably in the wrong forum for this too. I was following along a YT series on trying to set up the mega2560 where I made the lights blink on command, did that. The second bunch of learning was a fella dm’ing me help through setting up my Mega2560 and GRBL, that has run it’s course via my fb account was hacked and taken over, and what I was understanding from him seemed to be leading me astray. And I’ve had a bunch of changes and stuff in my life that has me bewildered and it seems my comprehension has taken a big hit.
Is there a better forum to ask for basic help getting back into this?

I don’t know how many people are actively using mega2560 with grbl these days, though I think that @GrblGru does.

Want to describe your problem?

Whether I can use 2560 and grbl is more I should know, I suppose. Along with I’m not sure which GRBL I dl’ed. The guy helping told me this and that to load and I did, like I mentioned I’ve forgotten a lot of what happened and understood very little. I have a GRBL WIn install tool V1.2 open here and a simulator that is GRBL GRU V4.6.0. Hoping you’re familiar with those?

By the way, what does the AVR mean in the forum title?

Oh, not saying you can’t use it, just that many people who used to have moved to 32-bit controllers. It’s a reason there might be fewer people left who have done this recently.

“AVR” is for the AVR microcontrollers - Wikipedia that are used in that system.

Maybe I’ll start from scratch on what I want to do and listen to suggestions on what direction I should have taken or keep going.
I have a home machine shop and want to automate the Z axis of a small turret lathe I run pretty much only one job on. No spindle or X axis involvement. I’ve been a cnc machinist for a good while so I understand that end of things, did a little poking around and chose the mega2560, Stepperonline DM320T driver, and appropriate ps for the little motors I have as a learning setup which is a 6 wire, 6v, .85a 2phase stepper.
The lathe operates 6 stations but simply moving a handwheel(Z axis) to work and engage the next station.

My thought was to get a cheap setup similar to what I’ll end up with to learn on. I have a pair of stepper motors sans any tags that I hope to use one of if I can determine the power requirements, assuming I can use the same software and Mega, swap out the driver and motor and make it fit the lathe.

OK, so you just need a single axis to work. Are you planing to zero with a limit switch or manually?

I presume you are not replacing the screw with a ball screw, so you’ll still have to deal with backlash and approach each station from the same direction as with normal manual machining?

There’s no harm in not having some axes connected. So I’d expect that just downloading the prebuilt grbl .hex file to the board is all you need to do. 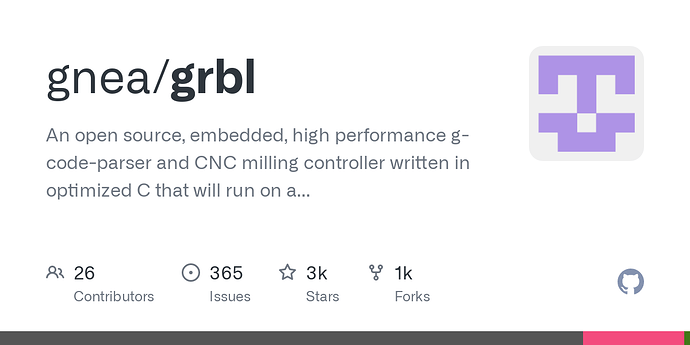 An open source, embedded, high performance g-code-parser and CNC milling controller written in optimized C that will run on a straight Arduino - gnea/grbl

Then follow instructions here to flash the controller with that .hex file, not worrying about recompiling because as far as I can tell based on what you said so far you have no need to. Look specifically for “grbl-mega” for flashing to this controller.

An open source, embedded, high performance g-code-parser and CNC milling controller written in optimized C that will run on a straight Arduino - Flashing Grbl to an Arduino · gnea/grbl Wiki

Then it is just a matter of your $$ grbl configuration:

For your 6-wire stepper, do you know how to identify which four wires to use and how?

I’m out to work for a while today so I’ll get back to you this eve.
I remember we loaded a hex file and did some configuration, probably best to figure out which hex file it was somehow.
I went through the 6 wire deal, cut off the oem connector and paired the wires with zip ties so I believe that’s ready to go.
This is solely a peck drilling operation so until/if I need more accuracy I won’t worry about the minimal backlash present.
I hadn’t thought about manual homing instead limit switch but that could work just fine. Go all the way to the mechanical stop and flip a switch.
And, thanks a bunch for the help.

I suggest downloading their official release https://github.com/gnea/grbl/releases/download/v1.1h.20190825/grbl_v1.1h.20190825.hex and using their instructions to upload it to your board.