Guys, I see a new (to me) feature in Laserweb settings.

Guys, I see a new (to me) feature in Laserweb settings. What should the default values be here and why? 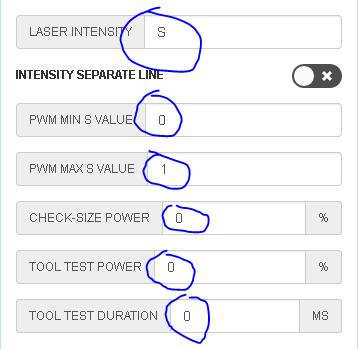 Most can be answered by reading this entry: https://github.com/LaserWeb/LaserWeb4/wiki/3.3-Settings-Gcode

The big difference is the MAX S value may vary depending on the controller board you are using.

I read that @Carl_Fisher ​ but it doesn’t seem to address the laser intensity with an s value or what the intensity sprays line tick box. Thanks though.

“LASER INTENSITY” tells LW4 which letter to use in the gcode for the laser intensity. Usually this is “S”, but there are some firmwares like old Marlin that need something else here.

The switch also is used for Marlin to generate a separate gcode line for the S value, instead of embeding the value in the G1/G2/G3 line.

“PWM MIN S VALUE” and “PWM MAX S VALUE” tells LW4 the min and max S values to use in the gcode.
Min is usualy 0, but in some occations you could want to have a higher value. For example to hold the laser tube active (with very low power) for faster reaction.
The max value is depending on the firmware. On Smoothieware it is usualy 1, on Grbl 1000. On machines that do not have a pot, this can also be used to limit the power to like 80% for longer tube life.

“CHECK-SIZE POWER” is the power in % to use for the “CHECK SIZE” function. This is mostly used only on diode lasers with a power setting that doesn’t leave a mark on the part, so you could see the outline during the operation.
On CO2 lasers, this should be 0, because you don’t see the beam and don’t want to burn the outline.

“TOOL TEST POWER” sets the power in % for the “LASER TEST” button and “TOOL TEST DURATION” sets the duration in ms.
On CO2 lasers I would set 100% and something like 20ms, so a single button klick on LASER TEST will fire the laser for 20ms with the power set by the pot.
On diode lasers, I suggest to set 1-5% (as low as possible to still see the beam) and 0ms. This way you can manually toggle the beam on and off (without leaving a mark on the part).

@cprezzi Nice write up. I’ll update the Wiki with all of that info.

Ok, the Wiki page has been updated with the above info. Thanks!

Awesome guys! Thanks so much!!