My Genmitsu LE5040 laser engraver was finally delivered yesterday! <yeah!>
(After the first one got lost by UPS and several weeks of waiting for the claim to settle.) <sigh…> 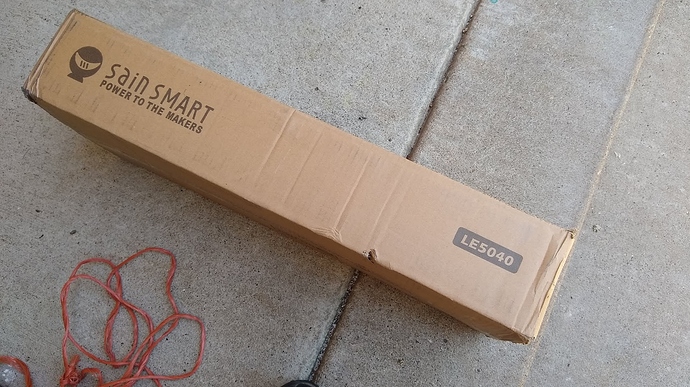 What?!? It came as a kit, not fully assembled? Ok, this is my first time buying something like this so what do I know … It was neatly and nicely packaged, so that’s cool. 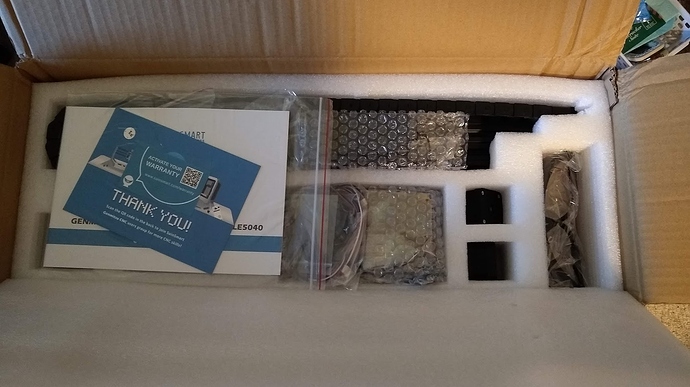 I was 3/4 of the way putting it together and ran into something that wasn’t clear to me in the instructions, so I found a youtube video of someone putting one of these together. He did something really strange though in the video, he peeled all the backing off the acrylic parts before assembling the pieces. My thought: so those were acrylic pieces …

Now I am undoing the whole assembly and taking everything apart so I can peel the protective backing off the acrylic pieces, [doohhh!] This is how I roll. Hopefully by the time I get this running I won’t be able to field strip the thing with my eyes closed. 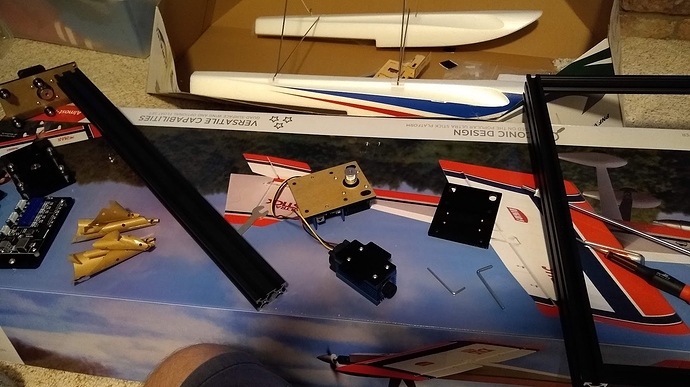 I got it all put together last week and was able to run it yesterday. I figured a few things out (like $32=1 to tell the controller board it’s dragging a laser around so turn it off during moves.) I get really good repeatability when resending the same job twice. But if I try to cut the same diagonals from different directions, that’s not so great. I am seeing way less cutting power than the youtube videos, but the tip I heard was to raise your material as high and as close to the laser as possible, and carefully focus it before each job. I was able to raise the material up a bit and got slightly better (but still not great) cutting power. I was able to get through 1/16" lite ply after about 10 passes … almost. I finished the cut with an xacto knife, but at least now I have the part I need. So next thing is I need to find a better base so I can get my material even closer to the laser. Still have hopes that this will be useful for smallish model airplane making jobs.

Oh, I downloaded the trial lightburn software and that seems really nice. I originally had hoped to find some open-source solution, but with everything else going on, it’s nice to just have software that works out of the box, so if I don’t break my laser cutter before the 30 day trial ends, I’ll probably go ahead and spring for a licensed copy and support them.

But if I try to cut the same diagonals from different directions, that’s not so great.

That sure sounds like backlash. I assume this is belt driven? Want to post a picture of it put together? Maybe also one of adjacent parallel diagonals cut from opposite directions? If you have backlash, it can be from belts being too loose.

Oh, I downloaded the trial lightburn software and that seems really nice. I originally had hoped to find some open-source solution, but with everything else going on, it’s nice to just have software that works out of the box, so if I don’t break my laser cutter before the 30 day trial ends, I’ll probably go ahead and spring for a licensed copy and support them.

On the open source side: Laserweb exists and might work for you, though I think that the active developers have mostly moved on, leaving @cprezzi to valiantly provide most of the remaining help.

Lightburn certainly is actively developed and supported, with their own Discourse but also with several of them participating here on MakerForums.

This being my first every device of this sort I just completely guessed on belt tension. That’s easy to adjust so I can play with that a bit. I think there is a truism here: the less expensive something is, the more fiddly it will be.

Pluck the belts. They should have similar tension. If they are the same length, they should vibrate at a similar frequency. If they don’t “sing” at all, the tension is definitely too low.

It’s also possible that the mechanism has play outside the belts, which was why I was asking for pictures. It’s possible, for example, if it uses v-slot extrusion and wheels, that the preload on the wheels is too low.

Here is an official product picture which is probably way better than I could capture with my cell phone in my dark dank garage. It uses the familiar extruded aluminum rails with rollers that run in the channels. The belts actually sit down at the bottom of the aluminum channel and the rollers run above them. There wouldn’t be an obvious way to pluck them like the string on a musical instrument. But I can experiment with tightening them up. For now at least I can send the whole cut job multiple times and get super great repeatability.

Here is a picture of my first cut tests. You can see something worked. I got two parts actually cut out finally. The 3rd slightly darker piece is an original from a kit I purchased (that is what I was trying to duplicate myself.) So let’s say I paid $350 for this laser cutter, it tool a month to be delivered, a week for me to get it together, 2 days to cut my first part. I see that I can order a baggie of 20 of these same parts for $5 and have them shipped the next day. But this is way more fun (I say to myself to justify my own craziness.) 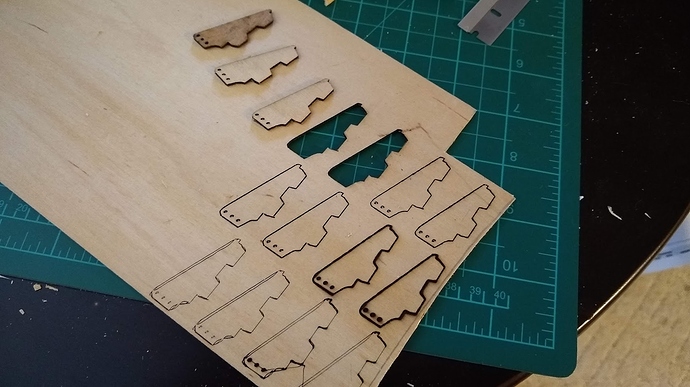 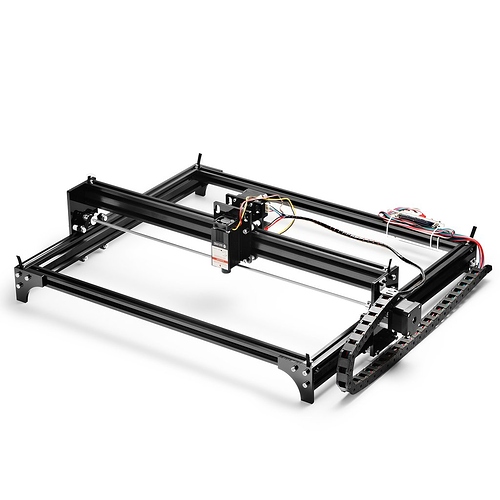 Ah, yeah that kind of belt arrangement. I have that on my OX router, and I pulled pretty hard on both ends (roughly equally tight) when setting it up, then did it again a few weeks later after the belts stretched a little. You’ll probably want to re-square the gantry after setting belt tension; otherwise it might hold a little crooked. (The OX has two motors instead of a torsion rod, which makes the process of squaring the OX different.)

The belt segments that go over the drive pulleys should be definitely tight.

Also check the preload on the eccentric nuts in the gantry plates. Each of the wheels should be possible to turn by hand while the gantry isn’t moving, but shouldn’t turn loosely. The wheels should be fully engaged with the rail, but not wearing out. If they are too tight and you can’t turn them with a finger, you are deforming them and there is too much drag and the belts are stretching in alternating directions. If they are too loose, you will have backlash from the gantry rocking slightly on direction changes.

I hate to be that guy, but…

I’m hoping that one of the plastic-wrapped items in the kit was safety goggles, and that you know whether they are good; some chinese kits have had bad goggles. In general, running a high-power laser like this without an enclosure is an extremely bad idea. Blue lasers are more damaging to eyes than more powerful CO2 lasers because they reach your retina directly; one specular reflection around the side of your goggles and that’s a part of your — or your wife’s, or your child’s — retina that will never grow back. CO2 lasers will more likely “only” destroy your cornea and then iris as they relatively slowly burn out the vitreous humour, so you might regain some eyesight after you have a cornea transplant from a cadaver. No such luck with blue lasers.

There is a catch-phrase in the firearms enthusiast community: “gun safety is no accident.” The same is true of laser safety.

I appreciate the safety reminder. I think I’m being super careful, but I am trusting the safety glasses that came with the kit and I’m trying not to look at or near the laser when it’s running.