Found another nice desktop laser format, 4040 and only 25cm high

I’ve been looking at Russ Sadler’s upgrades to the K40 and got to looking for a machine to upgrade. I remember last year someone mentioning a 4040 and found this beauty. 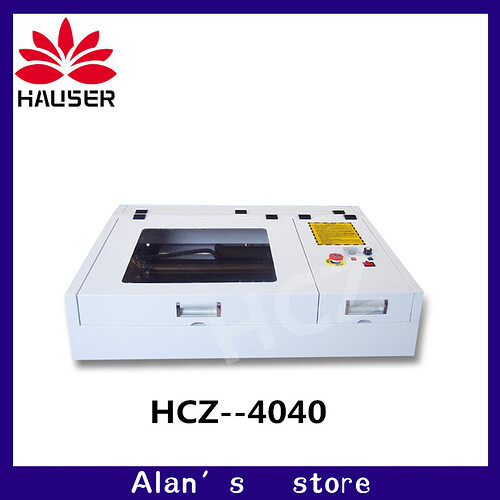 Even has a place for your cell phone…

This one already comes with a telescoping head. That head (K Series, 12 mm lens, 20 mm mirror) has a bit over 20 mm of travel.

I use the same one with my K40. With my setup, I can focus anything from paper-thin up to about 16 mm thick. I can still engrave bigger items if I take the bed out. I just have to prop them up to get them into the focusable range.

The head is surprisingly lightweight. It weights much less than the chunky telescoping head I used before. It’s only intended to be used with 2" lenses (2.5" for extra clearance might work), but apart from that handicap it’s a really good head. The distance from the tip of the nozzle to the focal point is about 10 mm and it got a 3 mm bore. You get very clean cuts with something like a 60W aquarium piston pump.

Never versions of that head use a 2-piece lens tube and also work with 1" lenses.

What I’ve seen Russ do is change his tube and lens when he’s doing lots of cutting or lots of engraving. For cutting he has a lens which puts his small hole tipped nozzle just 3-5mm from the work surface for max air assist and for engraving he uses another tube/lens and a different nozzle which has a much larger hole diameter and keeps the nozzle further away from the smoke and burning on the top of the work material.

Having a long tube option also means you could put a slot under the motion platform in the front and the back and have pass-thru capabilities.

My head was about the 350g, but I also removed at least 200g more when I removed the drag chain and all the junk hanging off it. Necessitated moving the X hall limit sensor. 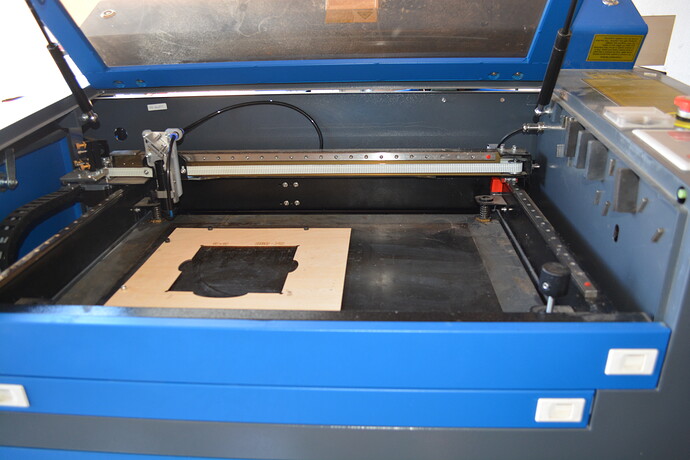 It does turn around quickly… so it does a job quicker.

Russ has a jig to facilitate the Z axes adjustment, made from 3mm stock. My Z table ‘wobbles’ from the slightly bent screws that raise and lower it. That makes it more difficult to adjust. This fixes that issue. 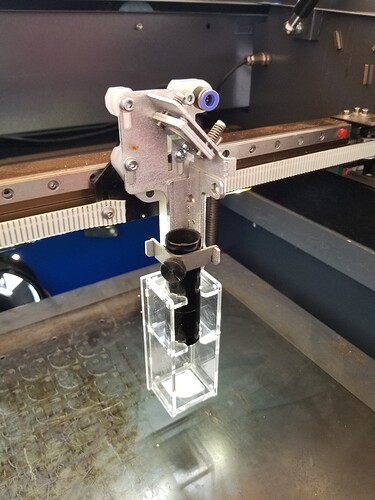 Don’t forget the mA meter and fire extinguisher… As soon as I knew it would lase, installed the meter. 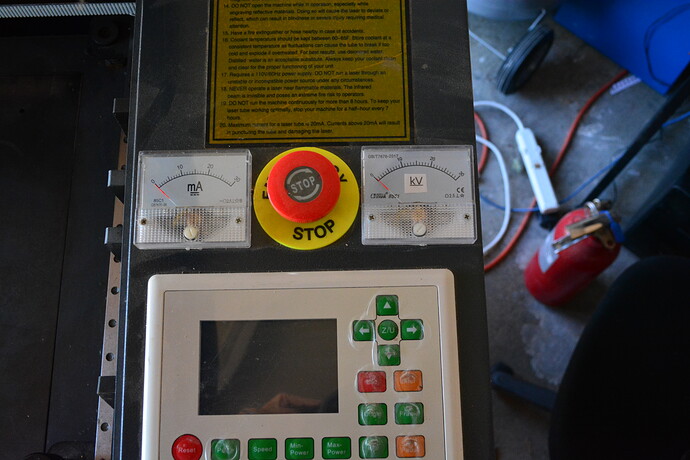 Did you purchase a Russ Spec laser from Cloudray? I see not only Russ’s lightweight head but also see that the X axis belt has been inverted. Not to mention the solid steel plate bed also looks familiar. 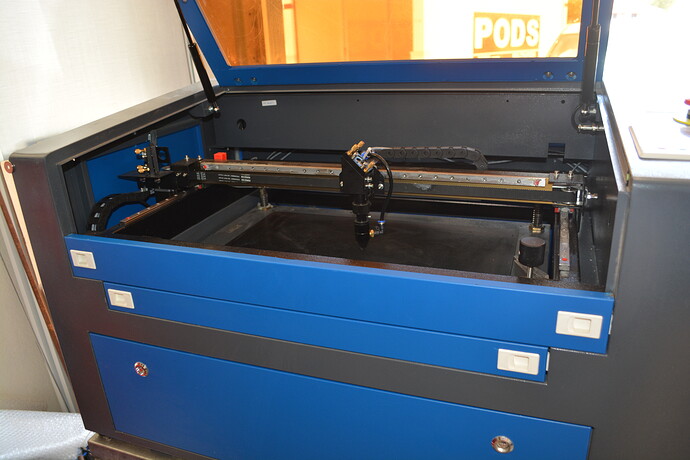 This was the basic machine I started with, came with the honeycomb bed. It was the first thing that went. Replaced it for $12 with a rolled steel plate. It now has alignment holes in it. All the junk, pretty much wipes off. Takes a few minutes, but it’s pretty easy to clean up and doesn’t ‘stink’ like most I’ve ‘smelled’.

This is the bearing (head) and the hardware that holds the drag chain to the head. The ‘bend’ protruding forward was where the head was attached on the right. No Z adjustment. 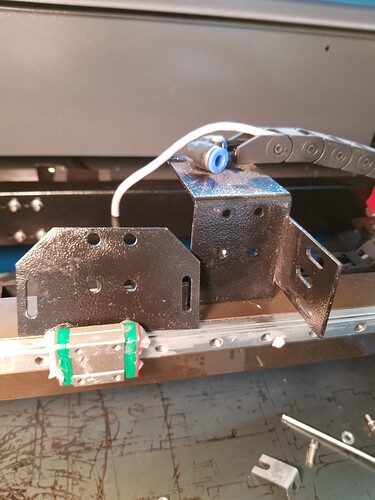 X axis belt has been inverted

It’s one of Russ’s ‘rack & pinion’ drives… There is also his tube/m1 holder… Sticks out the end now… 3d printed a cover. 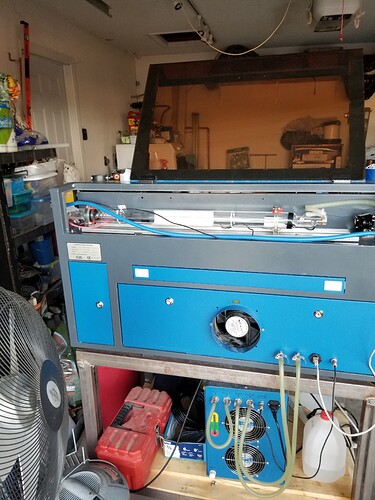 The purchase was to learn about them… I think I have, but it still eludes me more than I’d like…

Wow, so you did all the Russ-ifications on the machine. Well done sir!

Wouldn’t have survived it without his assistance… These lasers look identical…until you take a part and try to use it elsewhere. Sometimes the hole pattern is different… had to build up m2’s base to get it up so I could cut some parts for it… 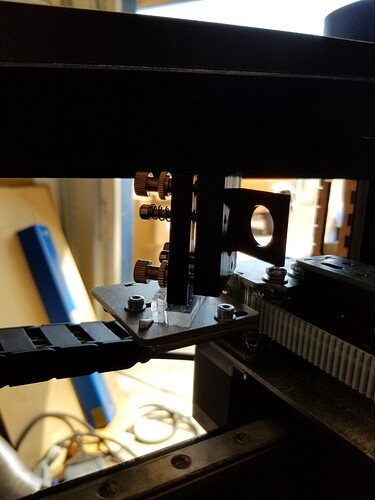 Russ commented he’s seen them 10mm off from an identical looking machine. One of my plates were ‘re-designed’ by Russ. Parts have shown up from him in the ‘post’… never had any support like that, ever…

This is pretty much what it looks like now… 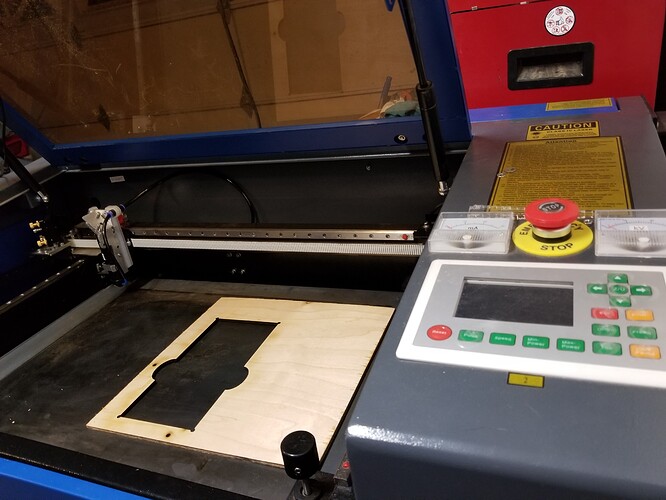 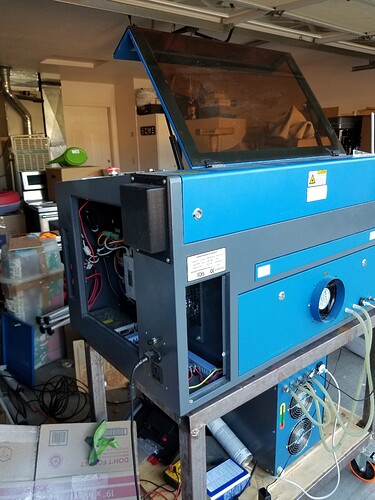 There are a couple bnc connectors under the tube cover for the scope connections.