First draft of the power supply. Have not annotated the parts yet

First draft ofcthe power supply. Have not annotated the parts yet. Hopefully get that done this weekend. The snubber diodes were added by me since a transistor shortened and the rectifier diode in the 24volt supply. As you see grounds between 220/110 and low power gnd are separated but can fail if a capacitor fails. Hope this helps everyone.

@Scott_Marshall This may be of interest to you.

Awesome, this is just what we needed, thanks for doing this. What tool did you create this in and can we get the source as this picture is a bit hard to read?

Also on the next version if you can clarify where the control signals enter the supply that would help me verify the external control schema. Its also difficult for me to find the AC input. Hard to read when I blow it up…
Again thanks for doing this, very helpful.

@donkjr i used eaglecad which is free. And of course i will publish the schematic in its full form. I knew some people were after this so i publish this first one asap.

@donkjr yes a bit of a narrative is required to explain the functions. The reversed logic of firing the laser with 0 can be easily fixed as well. Keep you all posted.

@Paul_de_Groot what hardware issue are you fighting. You mean why this happened or another problem?

@donkjr my problem is that the rectifier diode shortens after I start moving my steppers. I used replacements (FR307) which should be working but after a few steps they blow. Ordered the originals HER308G as well from RS online which arrived yesterday. Replaced it and so far so good. This one seems to hold.

@David_Richards_djrm yes saw that. One of the issues I had is that the high voltage seems to kick in when I hook up my laptop via the usb port. The OP amp input 15 and 16 are floating so I have grounded them and that seems to have solved that problem. Slowly rectifying the design flaws…

@Paul_de_Groot Still seems possible you have a grounding problem and these are symptoms not the cause. Hope you current changes fix it for you.
Which diodes are you referring to? I still have difficulty viewing the schematic as it is blurry when zoomed.
The floating op amp inputs isn’t good but shouldn’t really cause excessive current draw in the steppers? But maybe these are two problems.
Is this a standard K40 setup or do you have a conversion in place.

@donkjr it’s the rectifying diode in the 24volt supply line. I have a nanom2 and a grbl cncshield with a arduino. Also have made my own to get playing with it. I think that indeed there were some ground issues. Haven’t assembled it all together yet since i still have annotate the schema.

Still a work in progress to replace my cnc shield so i can just plug in all my connectors. Just waiting for the headers to arrive 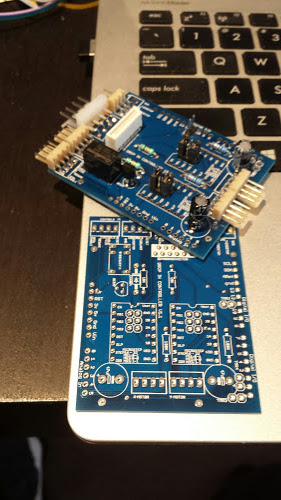 @Paul_de_Groot Perhaps the problem is with the stepper driver and not the power supply itself. If one of the driver output transistors had hailed it could draw a high current when it tries to turn on its complementary driver. Substitute the driver and use a power supply with ammeter. hth David.

@David_Richards_djrm thanks i already have replaced the stepsticks as well. So far it seems to be alright. Will test a bit more.

Great find @donkjr and the price is much lower than usual (160 Dollars).