I finally realized that some of the water around some of my faucets was leaking through the faucet and wasn’t just splashed back. So I set out to replace all the o-rings — and, as always, the valve seat along with the o-rings; always replace all the rubber components at the same time.

Turns out that the plumbers who installed my bathroom plumbing were not particularly gentle, and several of my faucets were damaged. Here you might be able to see that the portion of the faucet body at the upper left is a bit flat. 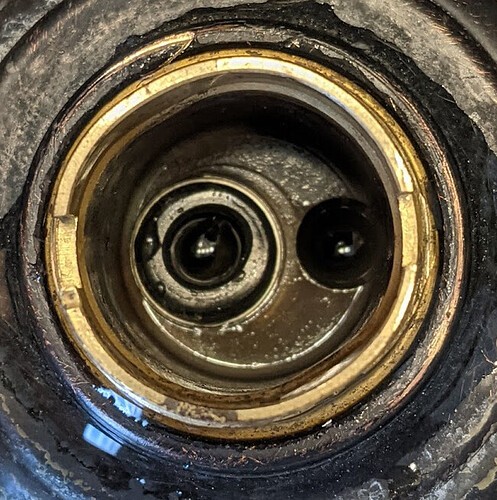 I measured undamaged areas below and above the seat, and determined that they were 20.5mm and 21.5mm respectively. The damaged side was bent in about 0.5mm at its worse. Not enough to leak (the leak is around the inner stem o-ring, not the outer o-ring that is against the bent part), but enough to make it really hard to run the retaining nut on.

I wanted a tool that I could insert into it and then twist to get at least part of the dent worked out.

), then cut off enough for a handle and put it in the mill vise. Used the “razor blade trick” to put the drill bit on the center of the top, then spot-drilled and through-drilled it to accept a handle. I had a cut-off gutter hangar screw in spare parts from another project I no longer remember, and it was the perfect size for a handle.

Logically, I should have cut wrench flats, but I was in a hurry and didn’t want to take the time to put the divider on the mill table; this was good enough.

Lastly, I need to make a spot to accept the dent before turning. Logically this would again be putting the divider on the mill table, but I was still in too much of a hurry for that. So I just set it on the bench working side up and used a chisel to cut a flat.

I let the screw cut its own threads to make it a solid fit.

I tapped my new tool into the hole with gentle persuasion with a light hammer, then gently turned it back and forth until it rotated smoothly, then popped it back out. Can’t possibly be perfect (spring-back), and I don’t know whether you can see the difference, but the nut now threads on easily and was almost possible to finger-tighten, whereas before it took significant force to remove with a wrench. Problem solved! 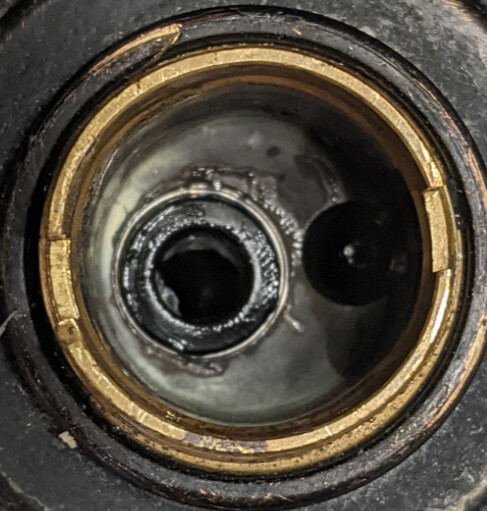 I’ve ended up using this tool four times now, and sometimes I need to thread the handle in from the opposite side of the block so that the flat can match where it needs to be inserted. Here you can see in the most recent orientation, with the flat chiseled in: 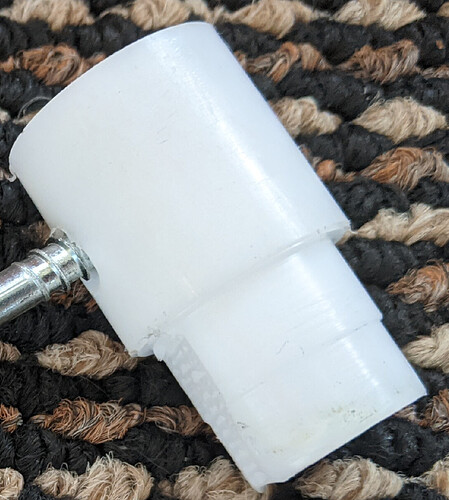 A view from the “business end” 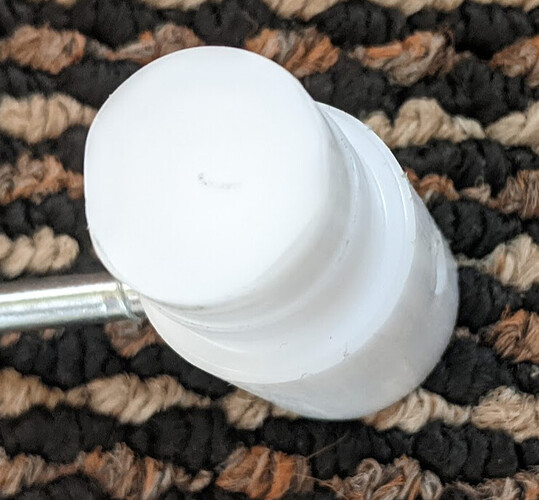 I had thought of making this out of aluminum before I remembered the POM stock, but I think that the self-lubricating nature of plastic was part of why this was an easy success, I would use POM again if I needed to do the same thing.

Love it Michael! At first I’d thought you were talking about the o-ring/seat at the bottom of the hole but started to figure out it was the large threaded hole itself. I can see the ‘flat’ in the upper left of the first pic and how it’s mostly gone in the 2nd pic. Well done!