@Erik_de_Bruijn , @Ultimaker Requiring personal information just to download an old version of Cura? What is wrong with you, and why do you think that this is an acceptable thing to do? And adding a captcha at the end of this? Seriously…this is MakerBot levels of stupidity.

Even if you check the “I’d like to download without sharing my information” it won’t let you. And on Chrome it’s completely broken, doesn’t even let you get to the download link. 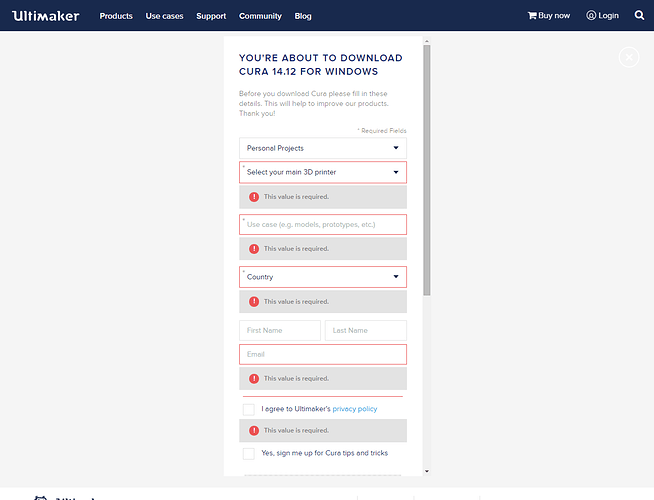 Well,few days ago i read few bad comments about bre from makerbot.
If you look situation little wider a lot of companies claim their products open source,but they are made so that you cant replicate them at home. Imho ultimaker,printrbot,bq and makerbot are all gone in same direction. People just dont wanna say it.

Only true open source that you can made at home is lulzbot,and i am glad they are OK,and i hope it will stay like that.

Huh. That’s surprising. I wonder why? Is it posted anywhere else?

I downloaded without having to share any personal info, only had to do the captcha (and that has been in place for a while IIRC). Used Firefox

Yeah, @Tom_Georgoulias that’s how I had to do it. Firefox worked fine, on Chrome it’s totally broken. This happens to be a normal thing for Ultimaker’s web devs. But I was frustrated when I posted it, I could have probably been a little more positive toned.

+ThantiK Did you try the github legacy releases route?

@Neil_Darlow , nah. I mean, turns out basically that it’s just broken for chrome.

And the info is not required.

The info is used to see what people use the printer for. The more people fill in maker culture stuff the more i get to do for makers. So enter that

@ThantiK which version of chrome on which OS are you using? With which addons? It works here on Chrome 46.0.2490.86 on Windows 7, with adblocks and tampermonkey as addons.

@ThantiK ​ Don’t want to attack you, but: @Ultimaker ​ is giving away software for free which did cost them real money and time. Why do you think attacking them for requiring you to give them whatever information they want to have is an acceptable thing to do? In the end you’re using free stuff which someone else paid for.

Nevertheless, glad that it tourned out to be only a bug, would have been a bummer if not :).

@Nils_Hesse it’s not free if I’m required to give them information. There are already too many places that want my information. I thought the 3D printing community was immune from this kind of behavior.

They provide full access to the source code, that’s great for the community.

I think if other printer companies want to recommend the use of Cura and don’t like the download methods Ultimaker provides, they should work with Ultimaker to come up with an alternative arrangement or host their own fork of cura on their own servers.

Making data like this required for entry is also stupid, as you will get a lot more poisoned data in your database. As people will fill in false data.

They also asked me if it was a problem to add this survey, and I did not see a problem with it as long as you can opt out easy. @ThantiK is just having a strange issue, I cannot re-produce it, could it be a caching issue?

I did a little more testing on Firefox. If I leave the “I’ll be choosing Cura for :” pulldown menu untouched and just click the boxes to download without sharing info and I’m not a robot, I just do the captcha and the the binary. If I select a reason from the pulldown, I have to enter data.

@Daid_Braam , whatever it was, it certainly seems to be fixed now! This is why I left web-development a long time ago. When something like caching can completely break a web app, it’s just too much.

Then I keep it on caching issue.