We have two rooms in our house with tray ceilings; our dining room and music room. (I’m sure the “music room” was intended as a formal sitting room, but for us it’s a piano surrounded by bookshelves.) The builder installed incandescent rope lights in both as accent lighting, but the tiny bulbs in the rope die out over time, and the light starts to look blotchy.

Years ago, I bought some LED rope light for the dining room, and it was really ugly. Not just greenish tint, but also irregular patterns of light. It looked worse than the partially-failed incandescent rope light I’d already thrown out. So that wasn’t what I really wanted when the music room lights started to fail.

A couple years ago, I impulse-bought 10 1-meter sections of aluminum channel + diffusers for LED strips, but then didn’t use them. When I decided to fix the lighting in the music room, I measured and realized that I needed about 10 meters of light. So I bought a 10-meter reel of 24V 8mm wide white LED strip with a power supply and some extra connection fixtures, and today I went to put them together.

I thought I was going to have to 3D print some supports to sit inside the crown molding that holds the lighting, but there were already supports holding the crown molding in place, and they provided a sufficient flat surface for the LED channel.

But what I did need to do was make four 2.5 meter sections of light out of 10 1-meter pieces of extrusion and one 10-meter section of LED strip. I cut two pieces of extrusion in half before I realized that I hadn’t measured the cut pitch of the LED strip. Fortunately, the cut pitch was 10cm, so it was a perfect fit. I 3D printed 8 joiners to hold the extrusion together, and started assembly.

The switched outlet is near one corner, and I fed them from the center, so two 2.5-meter sections on each of two legs, to reduce voltage drop (the same reason I chose a 24V system to start with).

It took all afternoon, but now just the indirect tray light is bright enough to read a book by. 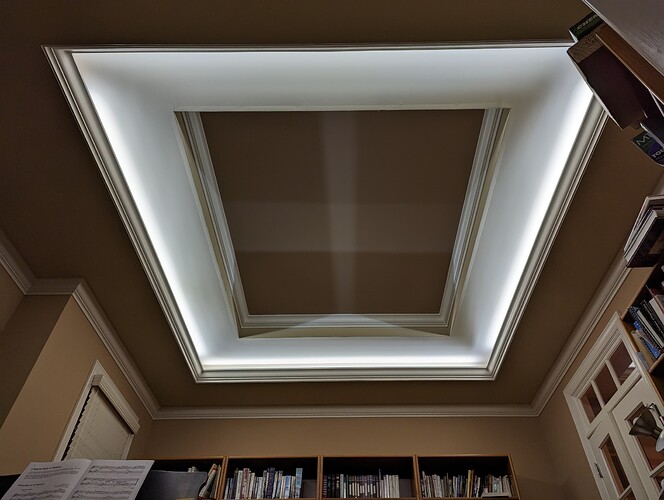 Now all I have to do is clean up all the detritus from my project.

If there had been more room for a power supply — say, a recessed alcove behind the crown molding, I could have used some far more powerful LED strip. There’s some that draws 1A per meter and would have been extremely bright. This is less than 2A. And the power supply is a little weak; when I hooked up the second leg, the first leg got a little dimmer. But my wife is satisfied with the result, so I’m going to call it a success and order some more to update the dining room.

FWIW, I didn’t actually start off intending to DIY. I started off looking for something commercial to just buy. I’d think this would be a common thing to be able to purchase and install, but I came up dry in my search.

In the end I think that given how often things don’t quite work and need to be modified or returned, I may have ended up ahead, time wise, by going DIY here, even if something commercial exists that is advertised to meet this need to fit behind crown molding.

Might be hard to find a low enough profile setup to fit above the crown molding, but I would think you could get close with off the shelf under cabinet lighting. Looks good though!

The space there is about 20mm tall by maybe as much as 30mm deep. No under-counter lighting I’ve seen would remotely fit; I did spent hours looking before I committed to this DIY solution. And honestly the power supply was one of the biggest constraints for this build, even more so than the light fixtures themselves.

Incidentally, the room used to have switched lighting on the top of the book cases. I used under-counter lights set upside-down on top of the bookcases for that. But that was old halogen stuff and it got hot, so I turned it off. I could do the same kind of thing now for additional indirect light if I wanted. But there I think I would just instead buy high-intensity LED strip and put a larger power supply up there, out of sight, as well. I’d get something like this:

Then I’d just put it on aluminum strip for heat sinking, along with a proper power supply hidden up there on top of the bookcases, and I could really light up the room.

But instead I think I’ll just stick with floor lamps with standard bulbs.