the learn from this site : https://learn.adafruit.com/adafruit-neopixel-uberguide/arduino-library

the code is:
#include “FastLED.h”

// How many leds are in the strip?
#define NUM_LEDS 30
// Data pin that led data will be written out over
#define DATA_PIN 3

and about red light : i told before this post that no metter if i put data or not, some lights turn on when i give to strip led power. 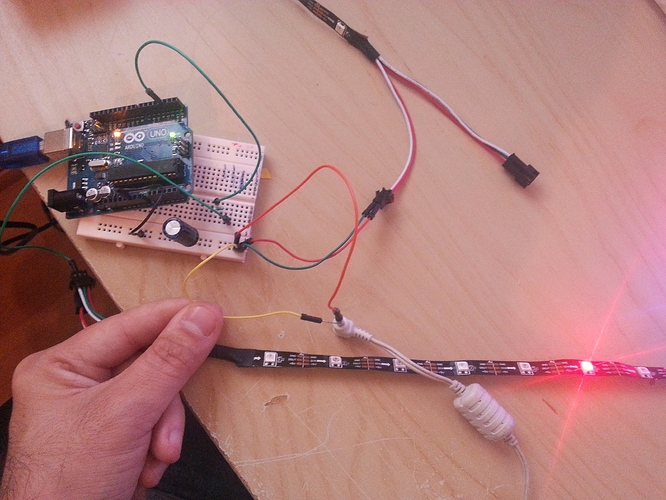 The problem must be your wiring or the library, as the code works fine for me.

Oh, and make sure you ARE indeed plugging into the correct leads on your strip. Yours are not the same as that diagram on Adafruit.

Do you have a multi-meter? You might want to check the resistance between each of the pads and the associated Arduino pins.

Also, I assume you’re connecting to the correct end of the strip.

i checked and everything ok.
and about end strip - this not metter, even i put in start this not work

It really sounds like your LED strip is bad. I have never had the WS2812 LEDs turn on, or show a color before the microcontroller sends them data. I had some 12v strips that would show green until they received data, and they were UCS1903.

You can optionally plug into the 2nd LED of the strip. You could try another pin, such as pin 12. I’d also measure the voltage directly on the pads of the strip.

Andrew has good suggestions.
I Highly recommend checking and probably replacing the factory wiring harness that came on your strip. That could be your problem, mine had a short under the shrink wrap that appeared and melted down. Yours could have a bad data line, or may have broken off of the DI foil. If your fail point is before the data reliably enters the strip, the ‘crackling’ of the bad connection could be interpreted as serial pulses and cause weird LED’s to light at random. I’ve seen it happen.

–Replace the resistor on your data line, My Uno burned out the first pixel with a small resistor, I always use a 470 ohm now.

– Probe your (Resistor protected) data line up the DI pads of the strip, until you (hopefully) find some good pixels. Random flickering is usually from bad data, or a poorly connected data connection. If a pixel is bad and is sending weird data, Identifying it and cutting it out should work. Also try a different pin, and even a different connecting wire.

–Are you sure you’re hitting the DI end of the strip, following the arrows? (Nevermind, I see the arrows in the pic now.)

I badly damaged some of my pixels when I got started, so much that they wouldn’t pass serial data. When my strip short-circuited while on a 30 amp supply, the power cables melted first, then the pixels smoked, one at a time and in order until I shut it off. Fortunately I only lost six.

Hello everyone,
I changed the wires , I checked with a volt-meter, everything looks fairly normal.
I used advice of putting the pen 12 and still did not work.
Also, I put diode (LED) and I see it to like, I mean I know for sure deserves a pin 12 (or 3 in the previous example),
And I use a 470 om resistor (bought specifically for the project that this resistor. I now have these in stock 5 resistors).
The situation right now is this: always no matter if I give the Data information or not, he turns on some lights in a certain color and it stays Fixed, ie not to like or replace colors.
After trying many attempts with 5 volts, I said to myself Come on, we try to raise the voltage. I did 7.5V, 9V volts, same reaction.
At 12 volts - this time it illuminates all lamps, just everyone and all kinds of colors. Every time I hang up and stitch, not the same color before.
As usual pen of Data information - not just affect (although I can see a visual LED diodes at).

so my LED strip fucked???

Yes, after applying more than 5v to the strips, I’m sure you have "fuct’ them up. Your strip is done son

Yep. I’ve never over-voltaged a strip before, but I imagine the control chips have had it by now, 12V is way beyond their acceptable voltage. Don’t give up! Get another strip, triple check your connections, and use only the UNO for power.

Ok, I accepted the situation.

My ultimate goal was to ambilight television. So I need 4 meters of LED strip.
It’s not really cheap so I bought one meter to experiment and see that it works and then I will have security buy 4 meters.
I want to use the app AmbiBox and thought to use ardunio mini. If not then I will use ardnio Uno.
Perhaps you can recommend me where to buy cheap LED stripe one meter?