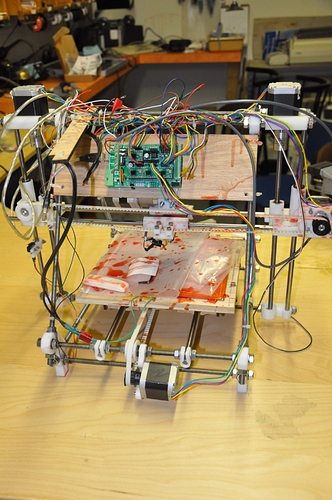 WTF? Why would someone vandalize a hackerspace?

@Tim_Lathouwers That’s what I said. Crazy.

Luckily it’s really hard to actually damage a stepper motor, so those are likely fine. Electronics just need a good bath in alcohol before they’re turned on.

It takes a real asshole to vandalize a hackerspace.

Also - it’s time to install cameras guys. http://www.familab.org (my space) has its public camera that takes pictures every 15 mins when the lights are on, plus cameras on the wall that record the past weeks worth of activity on a rotating log and soon to have an off-site log of anyone who goes through the door with their RFID key-card.

thats retarderd… why o why.,

Wow. I can’t imagine how it must feel to have your space violated like that. My heart goes out to all the NESIT hackerspace members. Best of luck rebuilding and repairing!

I don’t want to come across like a dick, but this is not bad because its a hacker space, vandalism is bad regardless of the nature of the space.

Well @Matt_Joyce , I don’t want to come across like a dick either, but 1) not all vandalism is destructed equally, some can be a form of protest, some of anger, some of ideological differences, some of seeded hatred, so the question is relevant… And 2) The question “why would someone vandalize a hackerspace” doesn’t imply directly that it is worse than other vandalism, but at the risk of being accused of sophistry, I think I could give some examples of certain acts of vandalism worse than others.

Spray paint tagging a wall at (say) Walmart is far different than this. They both take time and money to fix, but in this case business can’t continue until people who probably can’t afford a lot of the repairs whereas vandalizing even the front entrance to a Walmart doesn’t stop business and is something the business can easily afford to remedy.

Neither one is good, but one is clearly worse in its impact.

@Stephen_Baird you make it sound like being able to conduct business is the important activity. I dont share your view. Spray paint on a shop front impacts the whole community, and anyone who sees it.

@Steven_Law I’m familer with the term. I’m not sure I get your point.

@Steven_Law what in hell are you on about? Nobody misunderstands what a hackerspace is here…

@Matt_Joyce I’m not saying there’s nothing wrong with spray paint on a storefront. I’m saying there’s a degree of damage and disruption at play, and the destructive effects on the entire business that may entail, which makes one thing worse than the other.

I think as with most things there are about perspective and context. Vandalism to a piece of art or something created can be deeply personal, a shopfront has broader impact, is less personal but affects a community. Anyway, awful business.