Since my mini e3 v1.2 died and I replaced it with a v2.0, I had to build new firmware. I tried to port the old settings as well as I could. But the cooling fan doesn’t run, either on fan0 or fan1, even when I manually set the cooling fan speed to 100%. I have the hotend cooling fan running directly off Vin, I’m not using the “CNC fan” feature and didn’t enable it in the firmware.

The firmware I’m running is pushed to https://github.com/johnsonm/Marlin/tree/mkj-2.0.7.2.x-corexy

Does anyone see what I missed? I’m sure I did something wrong trying to pull the configuration over from the upstream version from btt…

Double check the pins file to make sure your old config is properly addressing the output you are on. Also double check the autofan isn’t overriding the fan pin.

I wasn’t trying to print with the fan on. I just tested setting fan to 100% in the menu while not printing. So autofan can’t be the problem.

I definitely have #define MOTHERBOARD BOARD_BTT_SKR_MINI_E3_V2_0 While lots of things depend on that, an example would be that the LCD wouldn’t work if that were wrong, because the pins for the EXT connector are different:

The pins files are the same between what was shipped and the Marlin tree I built in:

I did disable USE_CONTROLLER_FAN but can try changing that to see if it helps. (There just isn’t a fan pointed at the control board so it seemed pointless but would not be harmful.)

I’ll carry the VMM downstairs and actually test voltage on the FAN0 and FAN1 headers.

just to confirm the hotend fan, or the part cooling fan is the one that does not come on?

There are a few areas that even though you define it in one file, it can be overwritten by another file further up the chain. For example in Configuration_adv.h, these will overwrite your pins file definitions.

Then you have the common pins file for all the SKR Mini “pins_BTT_SKR_MINI_E3_common.h” which yours shows:

All of this file stacking and superseding can make tracking down the issues tricky.

TL;DR It just so happens that this part cooling fan is only mostly dead.

My hotend fan is on unswitched Vin through a buck converter to take 24V down to 12V. It’s a very quiet noctua.

I moved the header from FAN0 to Vin and it started right up. Moved it back to FAN0 (I now noticed that there’s an LED indicator to let me know when it is powered) and the fan didn’t work, even though the LED showed power and I measured 24V on the pins. Thought that maybe the dupont connector was not seated right (the pins for Vin are longer because they aren’t in a JST-style block), but then measured 24V at the other end of the cable.

Then I spun the fan again with my fingers (I had tried this earlier) and this time it started running.

So, just bad bearings, and time for me to try to find a higher quality part cooling fan.

The timing with swapping out the control board? Coincidence? I think so!

The bearings quit making noises after running for a while, so maybe it just needed to re-seat some grease. It’s running OK now. But a quality fan should just work. This one hasn’t gotten that much use because shortly after installing it I switched to printing mostly PETG with no part cooling fan.

Yeah, getting quality 24v fans is tricky. Lots of junk out there (likely just 12v fans they do some hackery to). I have not found good 40x40x10 axial fans, and 40x40x20 radial 24V fans that are reasonable in price, 24V, move lots of air, and don’t sound like a jet engine. I guess this is one of those “you can only pick two” problems

I tend to pull the sticker off the back, put some light sewing machine oil on the bearing at the back of the fan, then put the sticker back down. Tends to give a little more life to an ageing fan while a replacement is in route.

I guess I could use the 12V supply, and use a voltage divider to put the 24V fan output within range for Vgs for an external MOSFET to drive a 12V 40x40x10 radial fan. Good thing I haven’t yet designed a case for the electronics for this printer; that will take me up to four separate boards…

I’m happy to run my hotend-cooling noctua whenever the printer is on; lifetime of the noctua might be longer than the current iteration of the printer it is on. But part cooling fan is a lot trickier. And just switching to axial fan doesn’t solve the problem. (Mark Rehorst apparently deleted his reddit account due to all the abuse he got when he pointed out that you should test whether air actually flows through your part cooling shroud; that fluid dynamics is actually hard.)

OK. Now after running it for a while it’s running better than ever. When it was new, it wouldn’t keep running at below about 28% duty cycle. Now it keeps turning down to 15% duty cycle. And it’s smooth now. I really don’t understand how this works, but I guess I won’t complain until it quits working again right in the middle of trying to print a PLA part.

If it’s a bushing fan then chances are it’ll run good up until the moment it won’t turn into more. Then the oil trick can help for a while, but it’s a just a mater of time at that point.

I don’t run it very much, honestly, since I mostly print PETG without a fan at all.

Supposed to be hydraulic bearings: 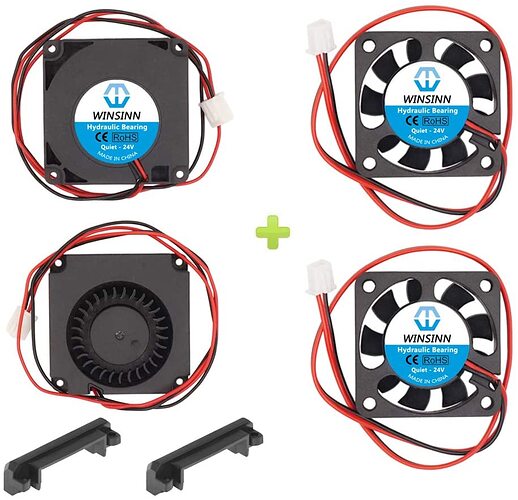 I wonder if I just needed to distribute some oil because I hadn’t used it for so long?