When I got my 50W laser I had to upgrade the exhaust to a 6in trunk and added a blast gate to allow me to also plumb in the K40. Also seals the 50W from outside air that may leak in. The blast gate is black and is overhead as my exhaust goes out through the roof. Because of this I can occasionally forget to open or forget to close the gate.
I’m more worried about forgetting to close it as the damper on the roof vent isn’t air tight and, during the summer, warm moist air can leak in and cause a condensation rain storm in the laser (which has happened once 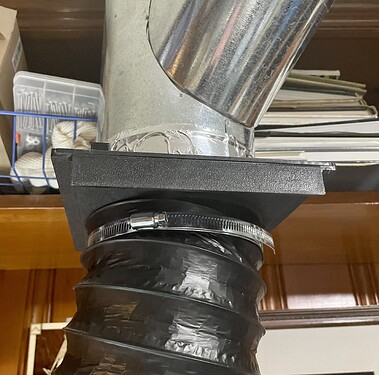 So I decided I wanted to added an easy to see, eye level, indicator for the position of the blast gate. Also wanted to keep it simple as possible. Settled on using a Red-Green bipolar LED and using a hall effect sensor to switch a DPDT relay to reverse the circuit polarity which then changes the LED color.
The video clip below shows the bread boarded circuit as I pass a magnet over the hall effect sensor. 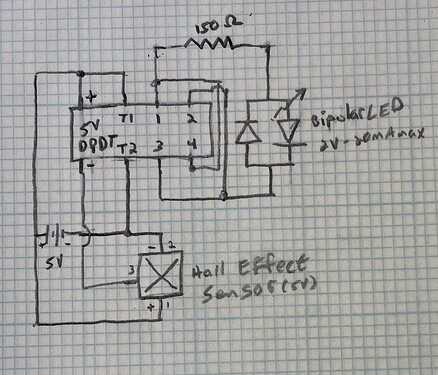 The hall effect senor was mounted on top of the blast gate housing and a magnet was embedded in the sliding gate at the same position as the sensor. The rest of the circuit was housed in the thermometer housing that I had 3D printed before that sets on top of the laser with the LED on top of that.

I 3D printed a housing for the sensor. This isn’t really necessary as you could just hot glue the sensor in place. The sensor was mount to a piece of solder board and hot glued in place. 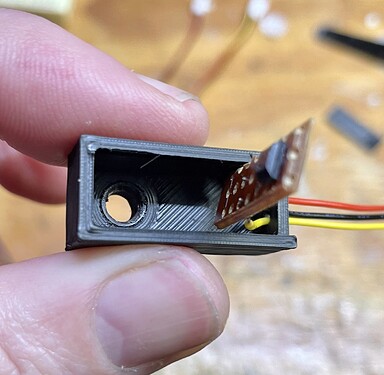 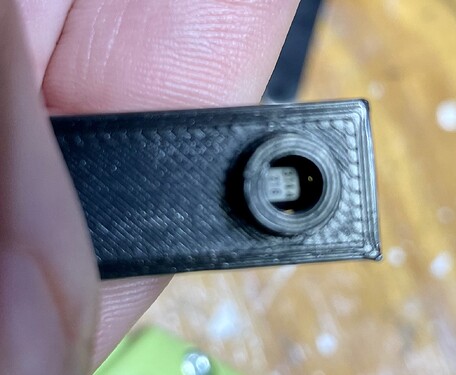 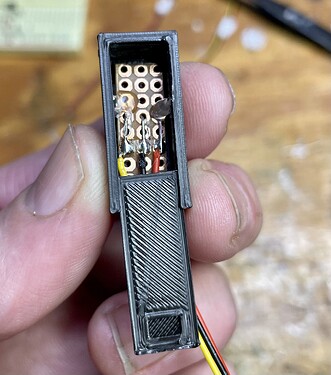 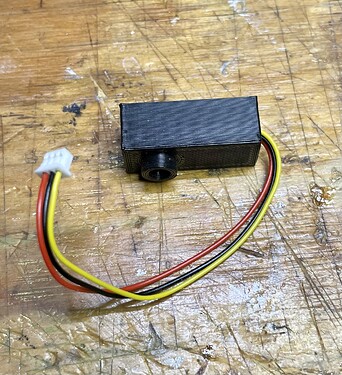 Drilled a 8mm hole in through the top of the gate housing and into the gate. Opened the gate and finished drilling the hole. Mounted the sensor housing to the gate housing in the drilled hole. I used two 1.5 x 8mm rare earth magnets, stacked together, to embed in the 3mm thick gate. Had previously determined the correct orientation of the magnet. 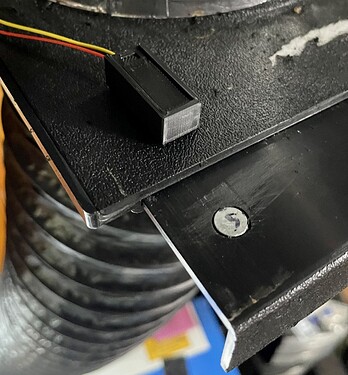 Rather than just let the 3 conductor wire hand down, I designed and 3D printed some wire clips that clip to the wire support of the flex ducting. These work really well and allowed me to cleanly route the wire down the ducting 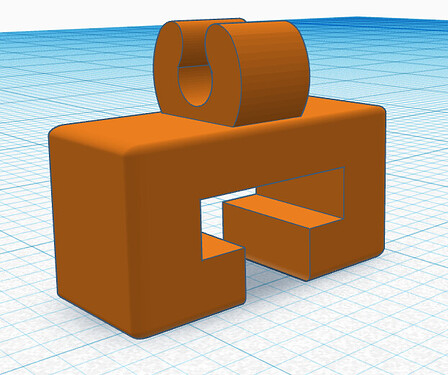 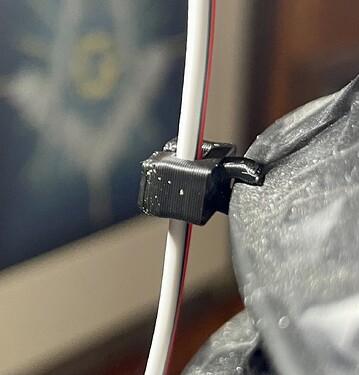 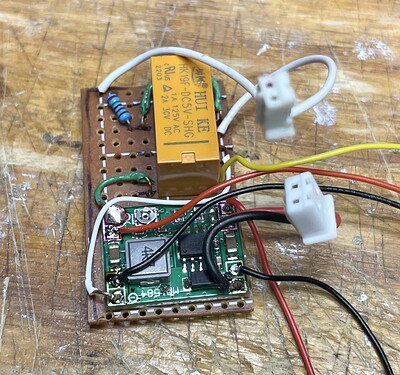 Dilled holes for the legs of the LED in the top which clip into a female pin connector.
Everything just managed to fit in the housing so I didn’t need to reprint it. 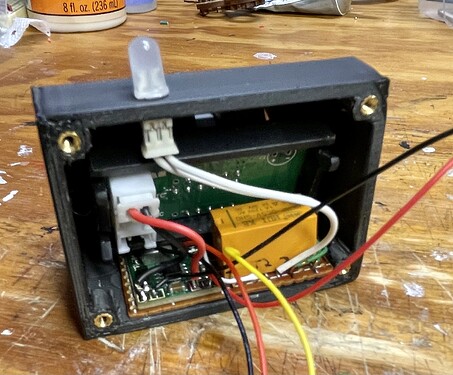 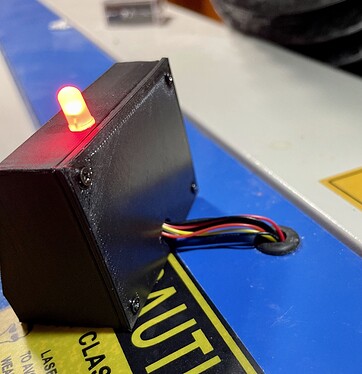 I’m glad to see your problem didn’t dampen your enthusiasm!

@HalfNormal he already said that he had a blast!

@NedMan what no automatic gate actuation when you turn on the K40??

Automation of the blast gate is definitely a future project.

Sounds like this project is ready to blast off!

@HalfNormal he already said that he had a blast!

I have a controller I built that turns on a local vacuum & light when the drill press is turned on.
I have been surprised by how useful this turned out to be.

It dramatically reduces the swarf from my drill press as I was always too lazy to bend over and turn on the vac, especially for short jobs. 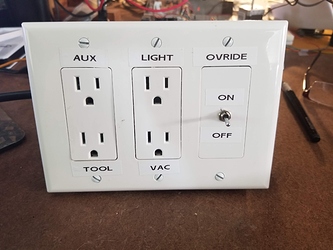 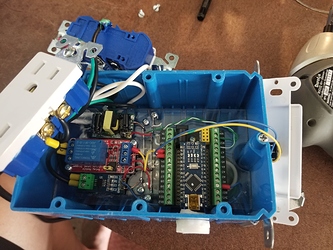 I have on my endless list of projects to add a radio link to this schema and that will allow me to activate a vac in a similar way but from more than one tool location.
In this configuration, each tool has a sender and the vac has a receiver. There is also a hand remote.

Yeah, you can buy these but they are too rich for my blood, and what’s the fun in that anyway!

In my current vacuum schema, I have vacuum lines running to each tool with plastic blast gates at each one that I have to open/close. They are a bit of a pia and I am lazy resulting in unwanted dust when I don’t pull the handle.
I have a vacuum on each side of the room to eliminate having to run ceiling pipes.
This is just one section of a 3-stage shop. I have 4 vacuums in all.

See the gates in the background. 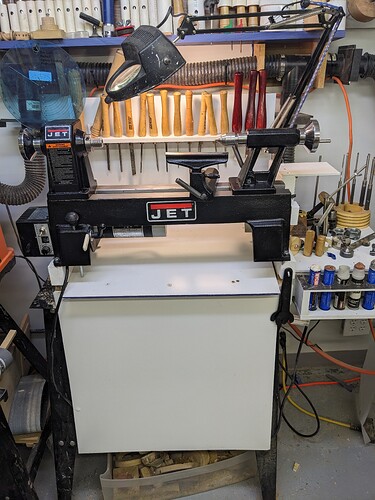 All that said,
A DIY gate design would be fun to attempt. In my research and tinkering I found out that getting to a gate design that can be opened/closed with inexpensive electromechanics while creating a good seal is kinda…not trivial. I put the project on pause…

DOUBLE FOUL! Incomplete knowledge of the acceptable grammical rules of the English language! World Wide National International Punning Rules states that reuse of Punned words are acceptable IF they are used in a gerund manner. Therefore the disputed word is not used as first punned and arguably provided as an additional abstractional deflection with intentional diverting of the focus of the primary statements of the OP!

“The reuse of any Pun word used in any grammatical context and subsequent to its first usage in the course of a sequential thread of posts in any social forum is considered a foul.”

I was worried the circuit part would leave me exhausted, but no, great minimal design. Thanks for sharing.