Belt gears - to flange or not to flange? As described in http://repstrapdk.blogspot.de/2017/05/the-re-birth-of-z-probe-mount-and.html?m=1 ,

Belt gears - to flange or not to flange?

As described in http://repstrapdk.blogspot.de/2017/05/the-re-birth-of-z-probe-mount-and.html?m=1, my Mendel90 (sturdy) prints a lot better when under fairly high tension, right below where the belt jumps off. To avoid embarrassing belt jumping-off incidents, I’ve considered changing the gear on the X axis shaft to having a flange, stopping the belt. But nophead usually knows what he’s doing, so - is there a reason the belt gears shouldn’t have flanges?

You mean the idler pulley? Or the drive pulley.

The drive pulley. The idler pulley is not even a gear: 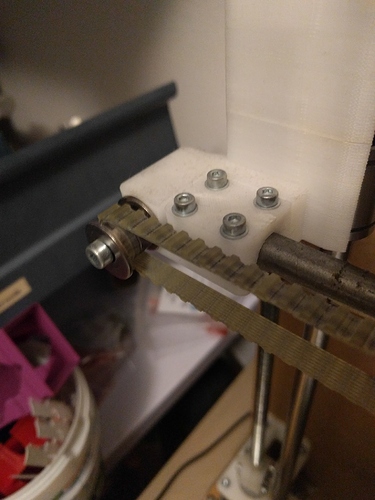 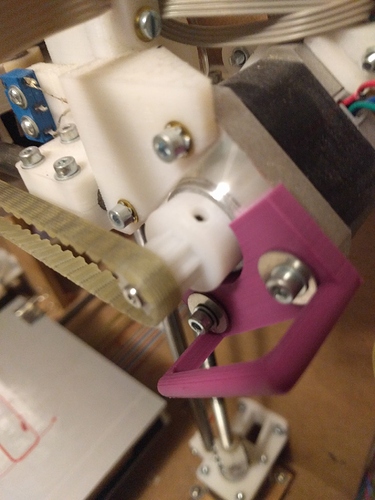 If it falls off, it needs a flange

Too many flanges adds drag and wears the edges of the belt. You generally want to use the minimum required to keep the drive working. Particularly with printed pulleys where the top flange is a nasty overhang or a separate part.

Curious: Would “crowning” the teeth help self-center the belt? (Like the no-flange pulleys on old time threshing machines?)

@Alex_Wiebe crowning a timing pulley makes the tooth pitch vary from center to edge and the belts rapidly self-destruct. What they do instead for self-tracking timing belts is herringbone belt teeth. It’s not done in our belt size range but common in big industrial belts.

Thanks for pointing out the downsides of crowning, I was thinking of that as a way to simplify printing, but won’t. It’s entirely possible the pulley is flangeless simply because it’s easier to print.

both my mendel90’s have flanged pulleys (aluminium, not printed), they seem to work ok. I don’t have the belt super tight, so much that it tries to bend things.

I use flanged bearings on my idlers, it’s great.
But you’ll get a lot better quality if you switch your belts to gt2 and use a machined drive pulley.

I have no idea what @nop_head ​ used for belts in his kits.

Flanges prevent the belt slipping off but if the belt rubs against the flange anything more than lightly it can cause it to ride up and give positional errors.

To make it run in the centre the motor shaft needs to be perfectly perpendicular. Sounds like you are pulling the motor out of line.

Perhaps try loosening the screws and shifting the front to the right.