Arrrghh need to design a brake...

Arrrghh need to design a brake… 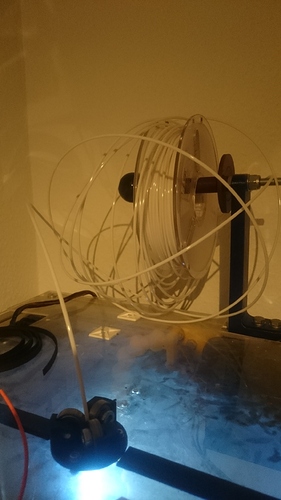 how about a sprag clutch, or does it have to be a braking system?

What printer is this the entry looks very interesting?

I used to have that problem when my filament spooled vertically. 10 and 15 pound spools would tip past the center of mass(cuz they’re never balanced axially) and then swing over, sometimes with enough force to rip the filament out of the extruder or jerk the extruder sideways on the axis. To fix that I used a one-way bearing to mount it and then it wouldnt swing back once it passed the center of mass over the top. So much easier to sit the spool horizontal on a lazy susan. No swinging, no unspooling, no muss, no fuss. Bearing plate is like $4 on mcmaster. 3d printed a cylinder that fit the center of the spool and matched the holes on the plate. 0 problems with the horizontal spool.

@Joshua_Taylor thats my homebrew printer. That is my thing Triangular Filament Guide found on #Thingiverse https://www.thingiverse.com/thing:1536453

@Fred_U No needs to be a brake

or a new holder

How does one create a brake that will not interfere with filament dispensing? The filament would have to pass through a guide mounted on an arm with a slight bit of tension. As long as the pulling force from the extruder motor caused the arm to deflect, the brake is off. When the pulling force is relaxed, the arm spring pulls it out of alignment and applies the spool brake.

The brake could also be electronic, a solenoid that engages the edge or face of the spool. Doing so would create a mechanically simpler design, as the guide arm could be balanced rather than spring loaded. When filament feed is needed, the deflection of the arm could trigger an optical sensor rather than a mechanical one.

An interesting engineering problem, to be sure.

@Fred_U Well no i work in a plant where wire is made. I know exactly how to design it cheap n dirty and also how to do it properly (with motors and swingarms). Ill post a pic when iam done

I’m looking forward to the photos, thanks

I use a cut up asphalt broom to apply gentle force and the bristles help guide the filament from wanting to fall off the sides of a new spool.

Jam a sponge under it. Then when it turns it’ll also get a free dusting.