I’m new to the Maker forums and have done some searching, but haven’t found a good answer yet.
I have an arduinoDuo and gShieldv5. I have downloaded g2core and programmed the arduino using the command line and the arduino-flash-tools-master\bossac.exe, I have the usb connected to the standard usb port on Arduino, not the programming port, and it does connect to the SPJS and shows two com ports, “TinyG G2 (com4)” and “communications port (com1)”. Chilipeppr TinyG workspace runs and recommends connecting with the pulldown set to “tinyG” or “tinygg2”. I have tried both. I see some level of communication with the board, but it does not echo much and the comms queue backsup when I hit any of the Jog commands. (I have no motors connected yet, just wires from the gShield) Is this a good way to proceed or should I try and load the grbl (version 1.1 looks like the latest) ?
I do have the blue LED on the gShield and 24V (correct +/- orientation) to the gShield, no power directly to Arduino, its powered over usb.

Any debug thoughts would be appreciated.
Thanks,
Bryan

I am a little confused. (I am confused easily!)

You have an arduino board not a TinyG board so I am not sure why you are seeing that port unless the firmware you flashed is for a TinyG. I would think this needs to be sorted out first. 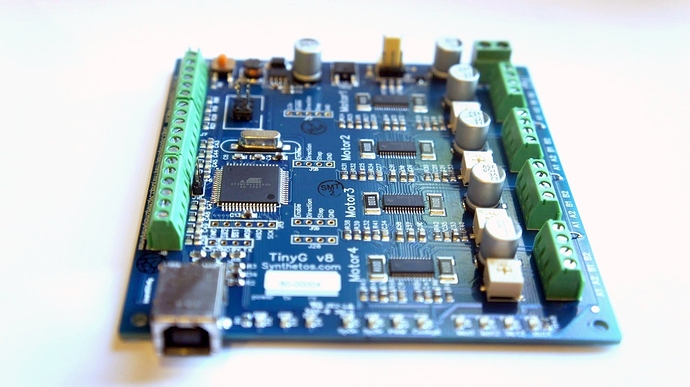 The TinyG project is a multi-axis motion control system. It is designed for CNC applications and other applications that require highly precise motion control. TinyG is meant to be a complete embedded solution for small/medium motor control. Here are...

Hi, I represent your confusion, it comes easy to me also. I think/thought the g2Core is supposed to be the Tinyg code ported to run on the arduino and it “was” advertised to be better then the grbl code base, but that was in 2016. I am also thinking about a 4th axis and am wondering if I should just move forward now with a new controller (but which one) or try and debug this setup.

Thanks for the clarification! I do see that it has not had much action in the last few years. Since I have not played around with this combo of hardware/software, I will not be much help.

@Bryan_Holocker How’d you go with this?

I do stuff with g2core, and have run it on Arduino Due’s before, so may be able to help if you still need it.

I think I’m going to upgrade to a 4-axis buildbotics controller. This will allow me to focus on the product design rather than getting the controller working.

Looking over the Buildbotics option now, it seems like a well put together package.

What software will you be using for generating the gcode for it?

Been getting into 4-axis stuff myself recently, and it’s been disappointing (so far) finding software that does 4th axis stuff well without costing an arm and a leg.

So far so good on the Buildbotics, I installed it and was up and running in a few hours. I use Vcarve Pro for the design side, it has a post processor for Buildbotics (more specifically Buildbotics supplies a post processor plugin for Vcarve). The Vcarve will do the 4th rotation axis stuff, that is why I bought it over some others, but Buildbotics only has control software for 3 at the moment. The sw update for the 4th is on their roadmap but not done. I needed a solid 3 axis for now, 4th when I get to it and hopefully they will have the sw ready when I get to it.