Anyone got broken filament on a regular basis? This time,

Anyone got broken filament on a regular basis? This time, it broke in two places apparently at the same time. (First time was with the original filament shipped with Ares - Sign in - Google Accounts).

Then, when @Ivan_Hoe asked for a picture of the sensor adjustment screw, I checked back as I remember picturing the top of effector. Indeed, the first picture in this one shows the screw on the left of the broken end. Talk about timing.

I have not run Ares 3D printer for quite some time. By this, I may have committed a cardinal sin of 3D printing.

When I finally tried something last night, the head kept pressing the bed really hard, so hard it scratched the blue tapes again and again, coming back in what seemed to be the next layer, and the next, and the next. When I tried to perform simple extrusion, a repetitive low “pa-pa-pa” sound came while the frame jiggled lightly, together with the feeder gears’ screeching. If I manually push the filament down while lifting the feeder’s lever, the filament resisted any advancement. Nothing came out from the hot end even though it was really hot. But If I extract, or manually pull, filament moved. I kind of recognized these as symptoms of a broken filament from my previous mishap. (Sign in - Google Accounts)

I yanked the filament, and found a broken end rather high. So I unscrewed the top of the catheter, and yanked the remaining section from it. (Surprisingly, the lower end did not look like it had been melt. But this did not caught my inexperienced attention.) I reassembled the catheter and pushed down filament. But still, the same sound, same problems. I was able to easily yank the filament out. Something must be stopping the good filament from entering the extruder. What could it be? It was late into night. Time to panic.

Finally I remembered that the lower end of the catheter could be screwed off. There was no heat in the metal screws. Once open, I saw another broken end inside the effector. Using a tweezer, it did not require too much effort to remove. (The first picture shows the broken end half yanked up. The full stretch is in the second picture, revealing the melted tip.) Phew - again. It is not time to worry yet, like Atticus Finch used to say.

Both times when the filaments broke - they were of two makes, they had been sitting idle for over a month. Can idleness weaken a PLA bone like it does calcium (human) bones? 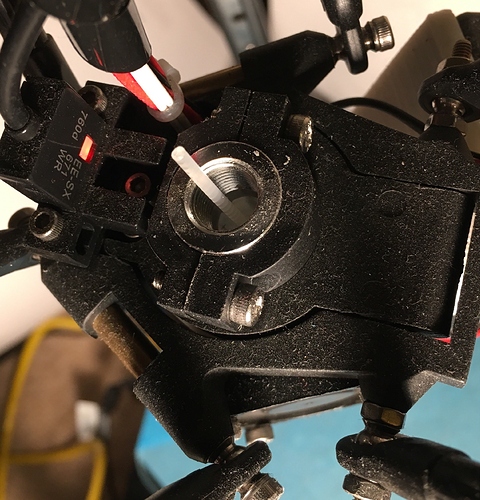 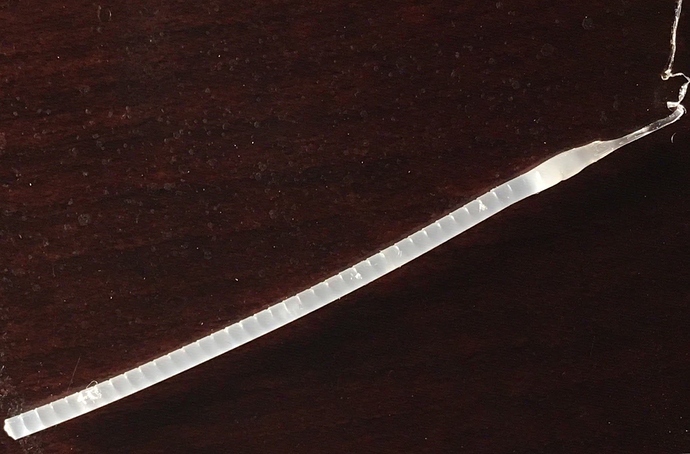 Ha, timing. Appreciate your sharing.
Will check out the sensor adjustment screw on monday.
Hope i don’t terrorise anything unexpectedly.

Yuan Liu, I think you might be experiencing PLA that has been exposed to moisture/humidity. PLA has the ability to retain water causing it to swell. I’ve watched some videos regarding drying filament or exposing it to a heated water bath (seems counter intuitive) to correct the problem. I have not experimented with this as I keep my PLA filament in airtight containers with desiccant when not in use.

@Igor, I’m not quite sure what you mean by metal box. But, it sounds as if you replaced your hotend. Did you reuse your existing nozzle or was there a replacement already attached? If there is a new nozzle, check to see if it matches the .4 mm like the stock Ares. If you are using this size, I would suggest changing your retraction settings to a larger value (incrementally) to find the rights value. Or, if the nozzle is a different size, just change the settings in your slicer to match.

@Igor_Galvao , I’m using Cura as my slicer. Under the advanced tab I have speed set to 40, and distance set to 4.5mm This may be the stock setting. But thought I would give you something to reference by. Good luck

@Michael_Coley My filament(s) broke sitting on the printer. Should I detach and store? My use of printer is rather sporadic, so I do not quite know when there’ll be a pause.

Yes, I too have the pauses in between printing

In reality, it might take about a minute to thread the filament each time you print. Otherwise you end up with mysterious feed problems like Yuan experienced. Storing it is not a guaranteed solution either. Moisture is not PLA’s friend.