Any suggestions for my next bukobot upgrade?  This is what I'm thinking about:

Any suggestions for my next bukobot upgrade? This is what I’m thinking about: 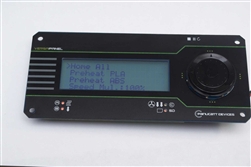 Viki LCD controller. I want to mount it to my encloser, maybe have some “nice” cabling going between the printer and encloser that is possible to easily un-plug for working on the printer when needed… Maybe something on the side that is able to swing out. (Was going to design / print something custom for mounting it) I have a power switch on order right now that I’m going to mount to the outside of the encloser (out of the way for my kid to easily turn it off in middle of print lol). Tired of un-plugging that thing heh…

Anyways, just thought I’d check, what LCD / controller type upgrades have others done? Are there other good options? I’ve also seen folks using rasberry pi and setting up remote printing, anyone get that working on bukobot?

Also tempted to play with that new micro adruino with oled display (https://www.kickstarter.com/projects/1516846343/microview-chip-sized-arduino-with-built-in-oled-di), I don’t know enough about it to know but wondering if it could be set up as a control for the buko, can 2 adruino’s talk to each other, one sending commands to the other? Would obviously have to add in some sort of controller like a knob or something if I went that route, would be a fun hack project to try out though.

Oh also, this probably won’t be for a while, as I have a tight budget at the moment… Just seeing what is possible at the moment.

I have a buko, a few actually. We’re adding a cable track for the x carriage wires, eventually a raspberry pi with octoprint & have done 2 CUBD 1.75 mods.

@Ben_Van_Den_Broeck CUBD 1.75? Not sure what that is, tried google and apparently it is some game?

@Andrew_Litt thanks! looks like that is better LCD (full graphics vs. just lcd text) than the vicks one I found. Do you know if it will work on the bukobot? On Azteeg x3 board… The site is sparse on compatibility info or specs. Another site re-selling it makes it look like it works on RAMPS

Yikes! Just did the shipping estimate, would be $25 cheapest option, shipping internationally… No longer such a discount lol

Talked to @Colin_Farrer who also sells that “Full Graphic Smart LCD Controller” on makerfarm… He confirmed it was indeed made for Ramps 1.4 and would need some sort of adapter to work on Azteeg x3 as the connections are different. Anyone know if such a thing exists, or whether we can figure out how to hack one?

Oh my bad @Jonathan_Foote , it’s QUBD. Its an extruder clone of the mk7/8

QU-BD was forced by bigger pockets to change it’s url:

That’s quite a mouth full for an idiot passing by to confuse QU-BD with something like: cube (no offense intended with the faux pas @Ben_Van_Den_Broeck - just sayin’).

It was an auto correct lol

Auto-correct brings new meaning to a killer app. It can really destroy a message.

So, someone has the rights on “Cube”, a geometric shape? wow…

So for LCD solutions, the main ones I can find are:

We got info for connecting the viki but ask @Whosa_whatsis where it’s posted.

Oh, if not in a hurry, there’s a mini viki coming soon…will be perfect for the Bukito.

I just set up Octoprint (on a Pi with WiFi and the Pi camera) and I am loving it. It was almost embarrassingly easy to set up. The trick appears to be to buy a WiFi USB adaptor that’s got the drivers pre-installed in OctoPi. I for the EdiMax “nano USB Adaptor”.

I also got a small HDMI touchscreen, which I might wire up so that I can control the printer directly. I’m not sure how well the web interface will work on a small touchscreen. But it’s easy enough to try!