A different father-son combo than I’ve posted about before! My father is visiting. He has some 16mm rope that is hard to tie knots in, but that he needs to reposition, and he had the idea of plates to run it through that would lock in place under tension, but still be easy to remove the rope to move it. 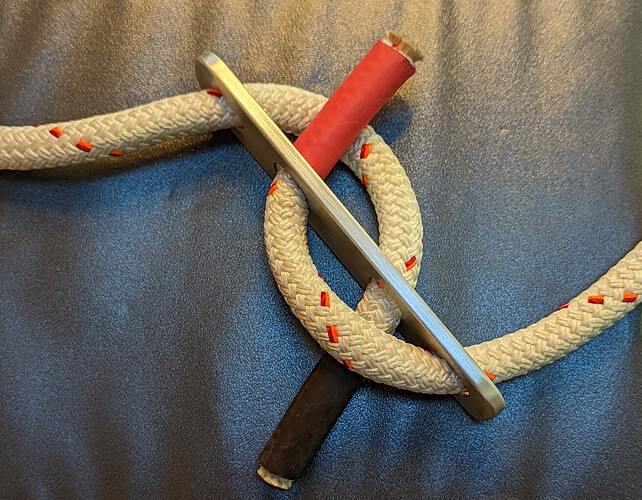 A while ago, he had brought me this conundrum. This is 10-ton rope, but fortunately he doesn’t need to support 10 tons. So now that he’s visiting, I looked up the tensile strength of 6061 aluminum and whipped up a design in FreeCAD.

We 3D printed two variants while experimenting with various sizes. The plastic was stronger than I expected, though not strong enough for the real application. I then made a drawing and we headed to the shop.

I grabbed a piece of 1/4" 6061 stock, cut out three pieces on the bandsaw, and went to the mill. Sadly, I didn’t have a 20mm drill for the holes (or even a 3/4" drill bit), so I had to finish the holes with the boring bar. Then I heavily deburred the holes with a rotary deburring knife (really, filleting them) so they would not have sharp edges to cut the rope.

Next, my New Vevor 2HP 82" belt grinder finally started to pay its keep. I put the large fillets on the outside corners with 80 grid sandpaper, then rounded/filleted all the outside edges with 120 grit sandpaper, and finished off with a scotch-brite belt all over the surface. It’s really loud to run, but leaning in hard on the scotch-brite belt didn’t slow it down appreciably, and it made short work of all the finishing that would have taken me a long time before. 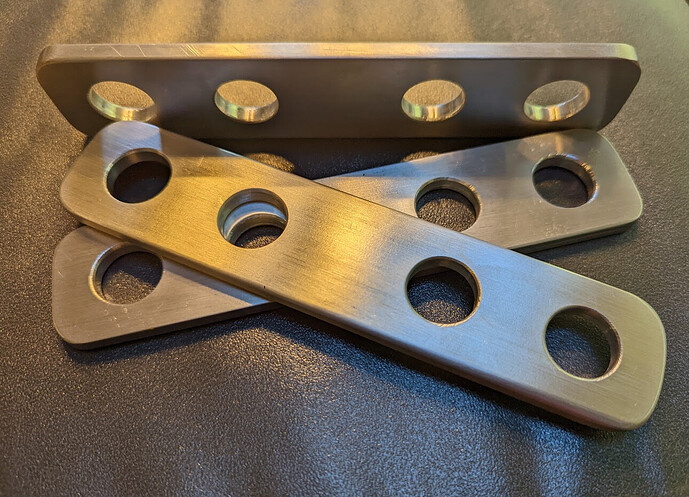 Soon, we fill find out whether it works.

I didn’t try doing FEA in FreeCAD even though it has that ability because honestly I don’t know enough about it. But it’s 130 square mm of aluminum at minimum at the edge of the holes, and the experiments with plastic showed that the bending moment was lower than I intuitively expected, so these should be plenty strong for the purpose.

Reminds me of a tent guy-rope tension clamp

Yup, that kind of thing was definitely the inspiration. Slightly different construction, but the idea that they would hold under tension is the same. But somewhat different scale of cord than for a tent guy-rope!