All in One Controller failure

I have a couple of issues that I hope someone else out there that bought an R7 All in One controller can help me solve. Since we have no documentation or web site to refer back to this forum is my main hope.

(1) I have an unconnected wire in the control box and I cannot figure out where it should go. It connects to a 2-pin connector on the MKS DLC board at a point that online sites label as TTL. The two wires are yellow and blue and it is the blue one that is loose. I probably disconnectied this wire while working the issue that leads to my second problem.

(2) This is a big one. The execution of the start-up process deteriorated over a span of 2-3 weeks to the point that the machine is now useless. Every attempt to start the system fails and what appears on the monitor is rarely the same from one attempt to the next. Occasionally (about 5% of the time) I get as far as a running bCNC but no apparent presence of the operating system. Without the OS there is no way to input a job, no way to search files, no way to exit gracefully. . . .

My guess was that it was the Rpi itself that had failed. I consulted with my unpaid guru (youngest son makes his living in the computer biz and has extensive experience with Raspberry Pi) and he agreed, so he sent me another Rpi of the exact same version and I installed it: absolutely no change. Now I’m thinking it is the micro-SD card that is corrupted so am working on downloading the requisite software and files to build a new one.

My question is: has anyone else using the All in One controller experienced a similar problem, and if so, can you give me any useful hints?

Brandon gave me the files to share when he closed down. Look into loading the sd card with the replacement imagine: 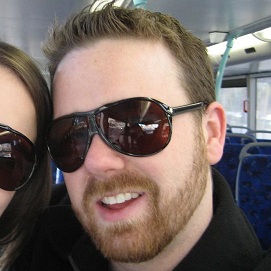 I never ran the all in one, so files are available, but come with no support

Eric,
Thanks for sending me to the files but I have spent hours on them and gotten nowhere. The links send me to a 404 page but I just shortened them to find my way to two 7z files that I think were the intended targets. I had never before encountered 7z files but research got me to a 7zextractor program that I downloaded and have run several times against the two compacted files. Unfortunately, it runs but just creates an empty file. I’ll be looking for another extractor to try later tonight. If you know of a good one to use on a Win 10 system I would appreciate hearing about it.

Then go to the 04 link, then R& link, and the files are there. For some reason linking to the end directory will not work, but I tested it this way and it works. Ther files are grblR7 800.zip and grblR7.zip Windows 10 can unzip them.

@funinthefalls Those are the grbl files, not the RPi files. It the RPi that appears to be causing trouble here.

The two files I found and downloaded are rPistuff.7z.001 and rPistuff.7z.002. I downloaded 7-zip 19.0 from www.7-zip.org and a 7z-extractor from another site. The extractor would just run, then quit with no output or error message. 7-zip gave a message that it could not open them as 7z archives several times, then suddenly did unpack them.

Now I have to figure out what to do with this info!

All I have managed to accomplish so far is prove the SD card is bad. I was able to build a NOOBS card using downloads from raspberrypi.org and use it to build the Raspbian OS and start the raspberrypi. Did learn from that exercise that the R7 uses the Raspbian Lite OS.

Now I have to figure out how to load and initialize bCNC. Maybe that is where those files from Hobby-Fab come in - - but they are not on the original (bad) card, at least by the same names.

Also don’t know what to do with the aio.img file. I’ll try to put it on a micro sd card and see what it looks like.

Plus, I still have that loose wire. Am I the only guy that ever bought one of these controllers?

Plus, I still have that loose wire.

I didn’t buy one, but it might be that posting pictures gives people with experience with the components at least a fighting chance?

Thanks Eric,
I did that and it resulted in a working SD card. Now trying to get the controller put back together.

I’ll see if I can figure out how to do that - - before I put it back together.

Cick the up-arrow-out-of-a-line button at the top of the text entry box and the site lets you upload a picture. Easy-peasy. 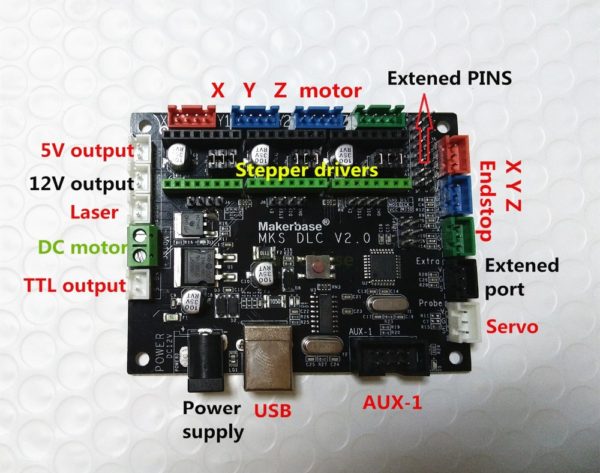 I downloaded this photo of the board from the internet as it is easier to see than any photo I can get. Toward the bottom of the left side is a two pin connector labeled “TTL output”. It cannot be seen here but the board itself labels the upper pin as “G” and the lower pin as “S”.

The yellow wire connected to “S” is connected to a terminal block that is mounted on another small circuit board. The blue wire connected to “G” is my problem. I first assumed that G was for Ground but I’m too chicken to just connect it and see what happens. When I first noticed that the wire was loose was just after disconnecting all the wires to the power supply so I could get to the micro sd card in the raspberry pi, hence there is a good possibility it was connected to ground.

Finally, this may all fall under the heading of “tape the end and leave it loose”. I say this because these two wires are yellow and blue and the only matching pair I can find in the build instructions are the PWM pair on the accessories connector. I assume these are for a laser, which I do not have, so it does not matter if the wire is loose (as long as it is not bare).

You can use a multimeter to find out whether G is ground. Seems likely.

Connect the blue wire to ground. Trying to remember but seems this controlled spindle speed and laser. Yellow/blue
There was a white/black pair that goes to A3 this was for z ground/touch plate.
The rest are straight forward connections.

Somewhere in all the files are the Rpi image, but for any that may have this issue:
Get new SD card
Go to rPi website
Follow rPi instructions to load Raspian
Go to the internet on the rPi
Go to bCNC website, download bCNC
Done.

Dwight you are correct I used light at first, but this install is a bit harder as it purposely is missing all the non-needed extras. Raspbian normal is fine.

I am just getting back to this problem CNC after working other things for a few weeks. (Had to get out my trusty old Piranha in order to survive.) As of now the Micro SD card on the RPi has been replaced and the OS rebuilt. The loose wire was connected to ground and everything reassembled . There are some start up problems that I think are due to loss of the previous config or init files (at least their equivalent on the RPi). Things like bCNC opening in a small window, having to reselect and open the com port at every startup, etc.

The problem I need to solve, though, is I cannot command the spindle to run. If I enter M3 S6000 the bCNC display says the spindle is running at 6000 rpm, but it is not. I can neither see nor hear any response to the command by by the VFD. I checked the VFD settings (had to find an English version of the user manual first) and they were still as given to me by Brandon. I have checked the two wires going from the controller from the VFD and find nothing wrong. I am almost finished doing the same with all the wiring from the VFD to the spindle.

My next step will be to install new wiring that goes directly from VFD to spindle to prove that the problem is in that segment of the system - - or not. (Probably should have done that sooner but it requires a trip to HD for some 16 guauge wires.)

Any hints or suggestions out there?

Just to be sure: actually a VFD or is this a DC spindle drive? I don’t have the all-in-one, so I’m doing some guessing here.

@Dwight, In any case, command the spindle on at full speed and measure voltage between - and + on the board to which the PWM output’s yellow wire is connected. You should read some voltage, hopefully around 5V. If you don’t read voltage, then the spindle on signal isn’t getting to that board. If it is getting to the board, then you should measure the output signal voltage from the all-in-one box to the spindle power unit. I don’t know if that’s a 0-5V or 0-10V signal; both are common. If that voltage is correct, then the VFD may be the problem.

That gives you something to test.

The YouTube video I found on setting up the device called it a VFD and that is what I use out of convenience, not necessarily understanding.

Are you suggesting that my loose blue wire from the TTL/G pin on the MKS board should be paired with the other blue wire in the connection to the voltage converter board?

I haven’t yet done the suggested voltage checks, but should be able to get to them today.

Thanks for all the help! 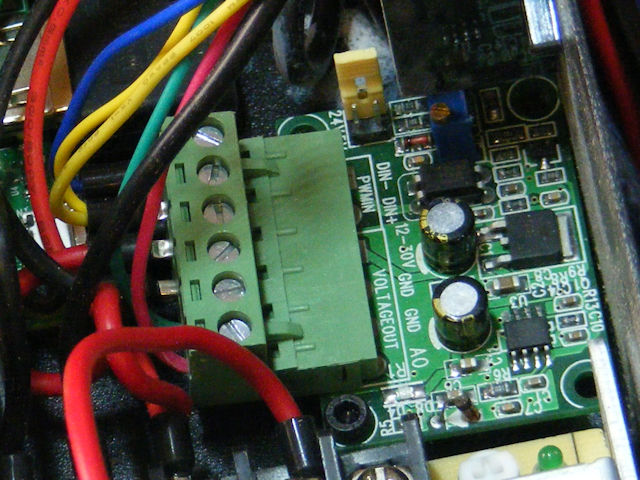 That board looks like one that converts a PWM (pulse width modulation) signal from the controller board to a voltage that varies based on the PWM signal, and that output voltage is an input to the spindle controller. A low voltage asks for slow spindle speed, and a higher voltage for a higher spindle speed.

Incidentally: VFD means Variable Frequency Drive and is used with AC or three-phase brushless DC motors; in your case, if there are three wires between the motor and the controller it’s a VFD; if there are two wires (typically red and black) it’s a DC controller that provides a variable voltage to the spindle.

The OUTPUT part of the converter board looks like it has a reference voltage, two ground (separate from DIN-), and ouput control voltage.