All, I have an issue.

I have an issue. I’m trying to convert a .stl to a .gcode for chilipeppr to cut. Its a 3d image of Alaska, but VCarve Pro will import it as a model, but won’t convert it to a machinable / tool path. I know the code is very similar, but CP wouldn’t accept it either. Is there a solution I’m over looking? I had hoped a software as expensive as VCarve would chew it up without a problem.

It appears I was seriously wrong! 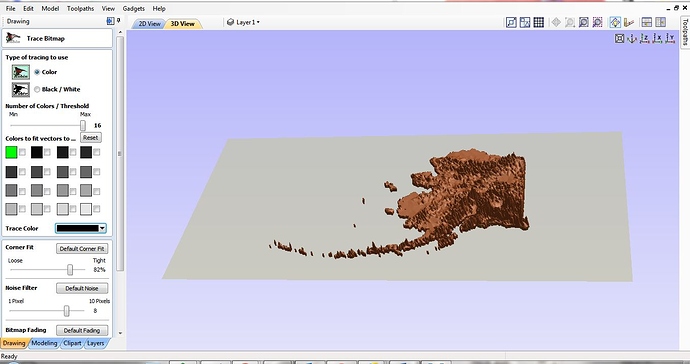 I’ll give that a try too. Right now, I’m making super slow headway. I found out Vcarve Pro (VCP) will do it, but since I can’t find any tutorials and I’m inexperienced… Its really slow moving.

I found going into “create a tool path” and using “roughing tool path” will get me to an initial cutting.

Are you looking to create a 2D outline to cut out? Or do you still want it to be 3D?

I’m trying to do 3d. I’m looking at Fusion but it won’t import. The file shows as a meshmixer. At this point I can’t get it into Fusion360 either. I was having better luck with VCarve.