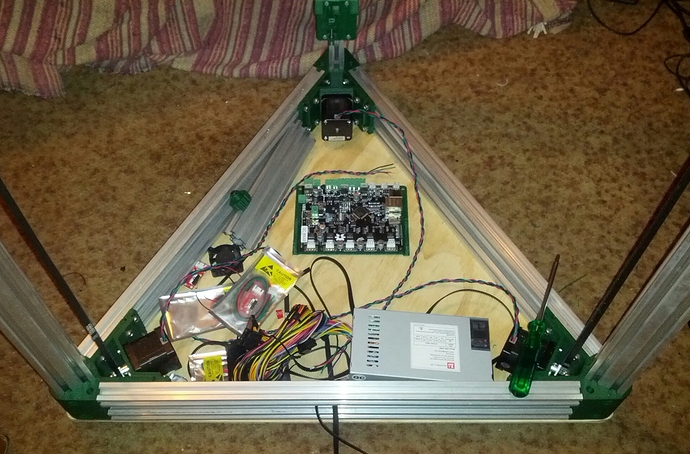 Nice, how big is the machine ?

Can’t wait for the video.

The interesting part is, we’re not entirely sure how it will perform. The level of detail that we might get with this machine is a big unknown, as is the final speed and print quality.

Though having said that, I’m pretty sure the smoothieboard will keep up with the printer. The idea/build parameter, was to print a standard 10 gallon bucket in an hour.

Ngarewyrd, let me see if I can find the mathematics behind the Delta type printers. You should be able to get a very good idea of the print properties with a few calculations.

@Albert_Latham It’s stuff like how far can we push the motors without skipping steps. How will flex in belts/frame accuracy and repeatably. How fast can we push plastic through the hotend and still have good layer adhesion. That sort of stuff.

@Electra_Flarefire Are you looking to do some tests to see where the weaknesses in the design are? Or are you taking a more theoretical approach and considering material properties?

@Albert_Latham at this stage. Mostly tests. The printed is being built as an experiment and a bit of fun.
Material choices are mostly based on price/performance and availability(frame size is based on material lengths.
For example, we have already uncovered significant flex/stability issues with the frame. This will be solved by cladding two sides in 6mm polycarbonate sheeting.
And we have already moved away from ball bearings + magnets due to mounting and potential wear issues for the Cherry Pi III ‘tensioned string’ ball and socket, approach. Using delrin/POM printed sockets.

@Electra_Flarefire You may consider redesigning the plastic parts that joint the frame at each corner. By adding relatively large gussets vertically you could potentially eliminate the majority of the flex. Though, I see the benefit of adding sides, as well. Containing some heat will make for better prints.

@Albert_Latham We have the polycarb from another project and were planing on adding it anyway to create a heated build chamber complete with heater.
The smoothboard has extra IO for things like this.