If real, this is getting interesting.

Seem for close to the price of a modified K40 you could build a pretty capable diode machine. 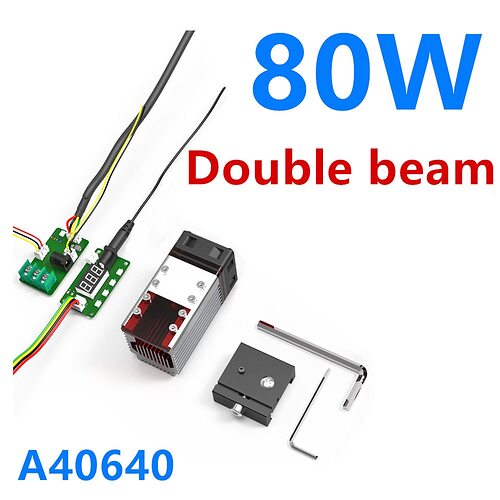 I know the most frustrating part for most diode users is that it is not very capable at cutting. It’s also limited in the type of materials that it can cut or engrave. Spending the few extra dollars for a CO2 laser is usually the best. That all said, there are some great applications for diode lasers.

Works for organic materials like wood and leather, not well or at all for plastics, and transparent materials not at all, right? Diode laser can be more tightly focused, but is often less round unless it is using compensating optics?

If in this thread folks contribute enough pro/con for each, what each does well and what the weaknesses or other considerations are, I would be happy to roll it all together into a wiki post and make it sticky. “How to choose between a CO2 and Diode laser engraver/cutter” or something like that.

I think we need a lot more empirical testing on these and the materials they can cut to make and characterize a recommendation.
I planned that kind of testing as I finish getting my unit usable just don’t know when … trying to get my backlog of projects under control.

Don’t know if this is of any use, I found it interesting. Youtube comparison of 20 and 80 watt diode.

Wouldn’t it be cool to be able to use a combiner lens or other mechanism to get a diode laser beam onto the beam path of a C02 machine to have the ability to reuse the motion control and select between or combine CO2 and diode. I have no idea if the optic system of a CO2 will safely direct and focus a blue diode laser.

While an interesting idea, I’m pretty sure the optics (mirror, lens) needed for a 450nm wavelength diode laser vs a 10600nm wavelength CO2 laser are going to require very different characteristics. Just saying.

What are you thinking the advantage would be of such a machine?

if this setup just “magically” worked:

There are plenty of examples over on the LightBurn forum for people who have mounted a diode laser to their CO2 laser systems. This is typically done with a Ruida controller. This controller allows control over to separate laser heads.

Here’s an example of one thread; 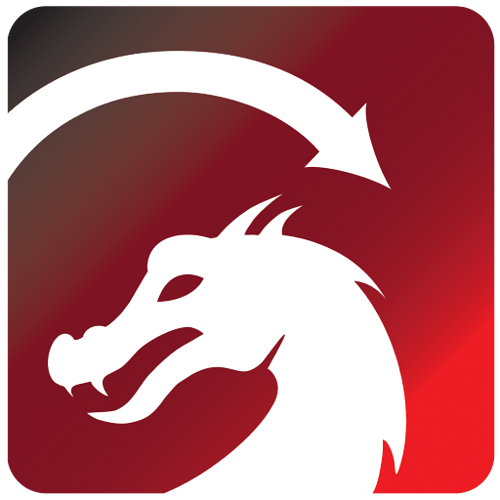 I was wondering, would it be possible to hook up a diode to an existing co2 setup as a second “tube” ? Just a thought i had, if i need a much lower power for darkening materials, less cutting. I’ve seen settings in rdc and lb/rdw for 2 tube...

looks to me they are mounting the laser diode next to the CO2 laser head and that is not at all what I was contemplating. It would add way too much mass to the X axis it would greatly effect the speed and accuracy of the CO2 portion.

I’m talking about some form of beam combiner lens like I’m currently using with a red laser with this but the mechanics of getting the diode into CO2 optic path was not spelled out, just wondering if it is possible. 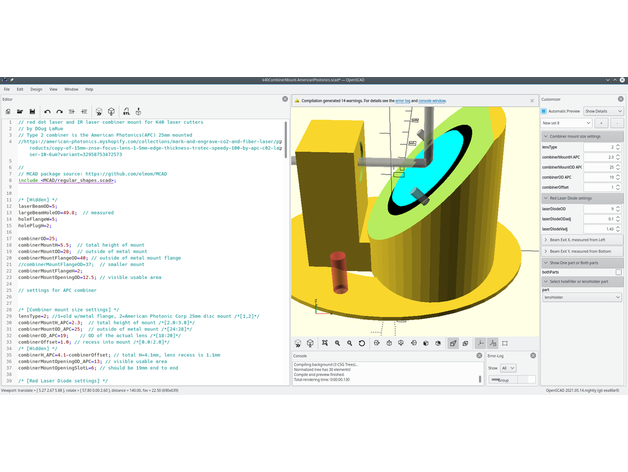 This is my NEW custom K40 Combiner Mount for adding a red dot laser pointer to a K40 laser cutter. It's defaulted to fit the American Photonics(APC) 25mm combiner(link below). To get the customized for where your laser exits from the laser...

I think @NedMan had the right question regarding focusing 450nm and 10,600nm with the same system.

There are plenty of CO2 lasers with two independent heads on one gantry. One could reasonably move them with pancake steppers for reduced gantry mass.

My mirrors looked to be reflecting the blue laser pretty good but the lens in the laser head didn’t pass the beam. I don’t doubt other light weight heads could be mounted next to each other but CO2 laser heads are very light weight and for a reason. Putting a full blown diode laser, heatsink, driving circuit and fan on the same gantry next to a CO2 laser head will effect your high speed CO2 raster engraving.

Now doubling up the mirrors(stacking slightly offset) or something for the 2nd beam and putting a 2nd lightweight laser head which has a 10,600nm might work. But beam divergence is probably the killer here. I think the diodes do not have divergence numbers near as good as CO2.

And you now, all this was stated as being possibly of value once a good list of pros/cons between CO2 vs diode was available.

It would add way too much mass to the X axis it would greatly effect the speed and accuracy of the CO2 portion.

It would possibly affect a normal K40 style laser but not the large bed CO2 lasers. The steppers and rail systems are much more capable of handling the extra mass. I have not heard of anyone complain of that issue when combining a solid state laser on the same mount as the CO2 lens system.

A year or two ago I saw a guy go into really making the larger Chinese laser head lighter to get better performance at higher speed. That is why I made the statement. Here’s one of the videos I’d probably watched back then. He even made kids of his lighter weight head. I also recall from my delta 3D printer setting over to 250mm/S movement and how it was possible because of how light the delta print heads are with the Bowden system as opposed to having the extruder on the effector.

I would expect the yellow lens to absorb blue laser. At some point, catastrophically. Clear yellow things so often do absorb blue…

Diode lasers diverge way more than a CO2 laser; divergence is in part a function of the length of the resonating optical cavity, to the best of my understanding. I don’t think you can reasonably remote the diode laser — unless you can do it through a fiber somehow? (This is not a “fiber laser” of course.)

My suggestion would be that the diode laser would be on a separate, independent belt on the same gantry. It wouldn’t be doing anything while you rastered with CO2; it would just sit at the far end. It would only have its own mass while you rastered with the diode. Vector cuts are slow enough that the mass on the gantry won’t matter, and movement of the whole gantry would have the same mass regardless of which head is rastering.

This is like an IDEX in the 3D printing world.

It would as @HalfNormal points out mean you would likely need a more powerful stepper to move the gantry. I’m using a high-power stepper in the #monocle to move the 1.5 meter long gantry… If I were going to do this, I’d put another carriage on my linear rail, run a separate belt and stepper for the diode laser head, and then be careful about what gcode I sent.

And then, to your point, the lighter you can make the diode laser head, the less it all matters.

It effects anything that moves. No matter the size. Granted it’s relative to the size of the machine, but the effect is very clear.

I have removed over 700 grams from the head of my ‘China Blue’. It’s current ‘speed limit’ is set at 1650mm/s. The speed is pretty useless, but with a low mass the overscan is so much smaller that it will run a 300mm/s engraving much faster. Spends more time engraving than slowing down, changing direction and getting back up to speed. 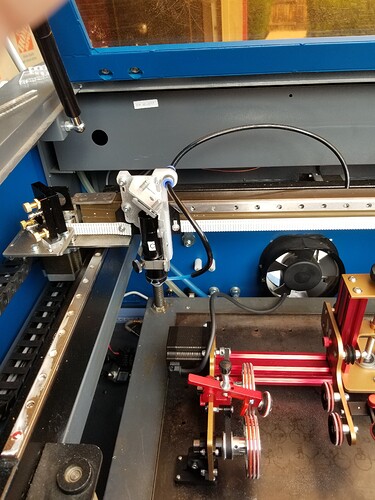 My acceleration is currently set to 50,000 mm/s^2. IMHO, this is where the advantage is. I haven’t pushed it any further yet, but it’s not loosing steps.

Interesting idea about separate belts, but the mechanics might be a bit of an issue, as one would probably have to ‘reside’ within the space of the other.

We all know that the idea of performance is relative. We also know people who have fancy sports cars that can outperform anything on the streets and yet unless you take it to a professional course you will never see those advantages. The same thing goes with the laser system. There are a lot of things we can do to make it better but in the end of the day, do we really take advantage of those few seconds that it saves on a particular project. If you are in a production environment and those few seconds add up to minutes which add up to hours at the end of a day I can see where it would make sense. That’s my two cents worth.

Very true that everyone has their own needs and expectations but I think the conversation was getting to the point of how much performance does that fancy sports car have when you strap a piano onto its roof.

With that, I have seen diode lasers with 4 or 5 inches of heat sink on them(ex: Ortur) and most of it was doing no cooling. What I’m getting at is some diode lasers will be less like strapping a piano onto your sports car and more like maybe putting a camping trunk behind it.

The bottom line to what I’m saying is that if you are into having that kind of performance of a CO2 laser, you would never strap a diode to it! Or a piano!