.1 layer height with Skin on. Sliced with Cura at 50% scale. 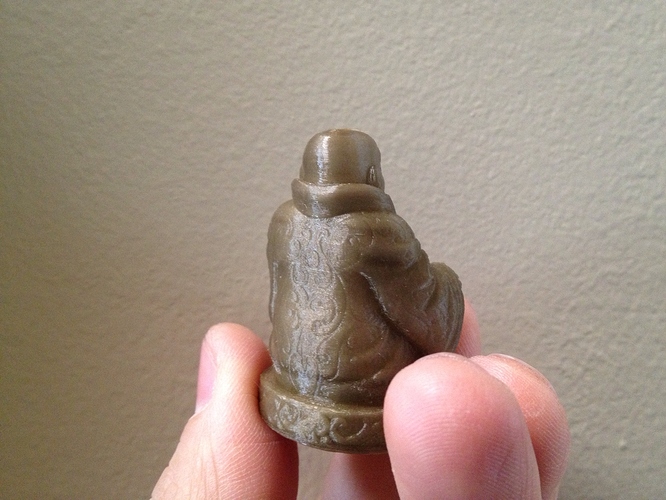 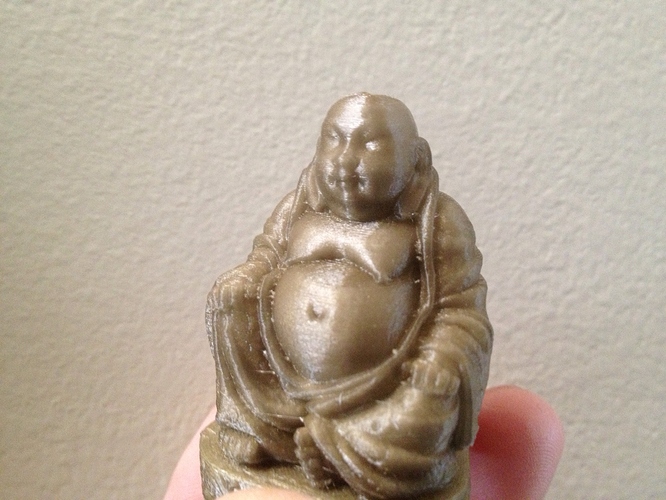 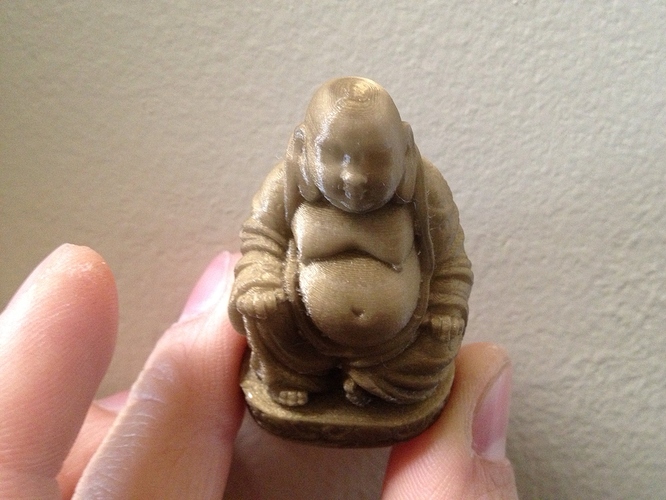 Nice, and impressive detail on his robe in the back. What type of printer, an Ultimaker?

Yes, an Ultimaker. Great filament too! This is a neat model with cool detail in the robe. It’s much bigger but I was being lazy.

Thats awesome! I dont know much about 3D printing but the implications are impressive. What materials can be used in a 3D printer? metals too?

Only plastics in these small printers but yes those exist in industry. So far.

Cool! I’d like to learn more about metallic looking prints.

It’s too bad the skin plugin is so simple. It doesn’t recalculate based on layer height, it just duplicates the previous layer.

Slic3r can also achieve this with low layer heights + infill every [x] layers.

Simple or not, SF/Cura skin still works well. It might not be perfect but it does a good job…

@Brigitte_Ilsanker Its simple, many suppliers sell metallic filament like silver, gold, and bronze. I have zero idea what is in the filment but it looks great! My stuff comes from @Jordan_Ross at http://printbl.com which is a reseller of Diamond Age plastics in the U.S. Ultimachine is another great supplier. I’ve heard great things about Faberdashery in the UK as well. I’m sure I’m missing others but there are only a few quality companies.

@ThantiK I have yet to try Slic3r with my Ultimaker. I intend to. I’m not sure I understand what infill every x layers is and its use? Strength?

The way SF skin works, it sorta goes back after slicing is complete and replaces the perimeter gcode so that it does 2 identical (except for height) loops at 1/2 height instead of the original 1 loop.

On an object with an evenly sloped side like a pyramid, this method of skinning will, in theory, produce a stair-step effect instead of a smooth one.

Slic3r uses a different method and slices perimeter lines at 1/2 height. The 2 perimeter lines aren’t just duplicates of each other - they’d be offset a little on a pyramid which, in theory, produces a smoother surface.

I’ve yet to observe this stair-step effect in SF skin… Maybe if I used thicker layers it would be more obvious but at the resolutions I print at, I just don’t see it…

Ok so dumb question then. Would just printing at .05 result in a better print? This guy was hollow. Forget it . I’m doing it!

For hollow or very-low-infill, disable skin and just slice at whatever resolution you want.

For more-solid stuff, skin can save you lots of time as infill is happening at the full height.

I’m a little late to the party, where can I download this guy? =D

I used this one @Eric_Chu but there is one other. Both came from the Google Warehouse it seems. http://www.thingiverse.com/thing:42077